Dry conditions have enabled rapid progress on planting. Some areas could use some rain to help crop emergence. The excellent weather conditions meant some districts were not represented on this week’s call, but those that were present estimated overall planting progress at 70-80%.

Cereals, canola and grasses are all Base 0˚C GDD crops. The cool weather has limited GDD accumulation so far (less than 290 GDD as of May 18), but warm weather is in the forecast later this week. 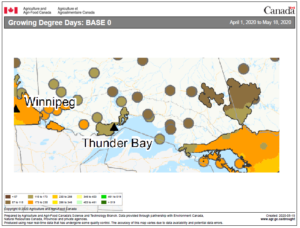 Growers are asked to report their final acres to Agricorp as soon as they finish planting to reduce the volume of reports coming in at the June 30 reporting deadline. In addition, growers are encouraged to use the online reporting option where possible to reduce call volumes and wait times. Reports can be made by calling Agricorp at 1-888-247-4999, by email to contact@agricorp.com or online at https://www.agricorp.com/en-ca/login/pages/ReportingAcreage.aspx

Most spring cereals have been planted and are beginning to emerge. Annual weeds are also just starting to emerge. The critical weed-free period is before the 3-leaf stage so if weeds are emerged herbicide applications should be targeted prior to this.  Disease pressure has been low so far this season so fungicide applications are not yet warranted. Growers should continue to scout throughout the season for disease pressure.

The cool weather has meant forages are slow to break dormancy and grow. Pastures are probably at least a couple of weeks away from being ready to graze, but tight forage inventories may dictate turnout dates.

Alfalfa is furthest ahead in Rainy River district, where some stands are already 3-4 in. tall. In contrast, alfalfa in some districts hasn’t broken dormancy yet. Alfalfa generally doesn’t grow until it receives about 110 Base 5˚C GDDs. The easiest way to know whether stands have winter killed or are just dormant is to check if the roots are healthy. More information on root health assessment can be found HERE. Stands with mostly healthy roots will grow once they get more heat. 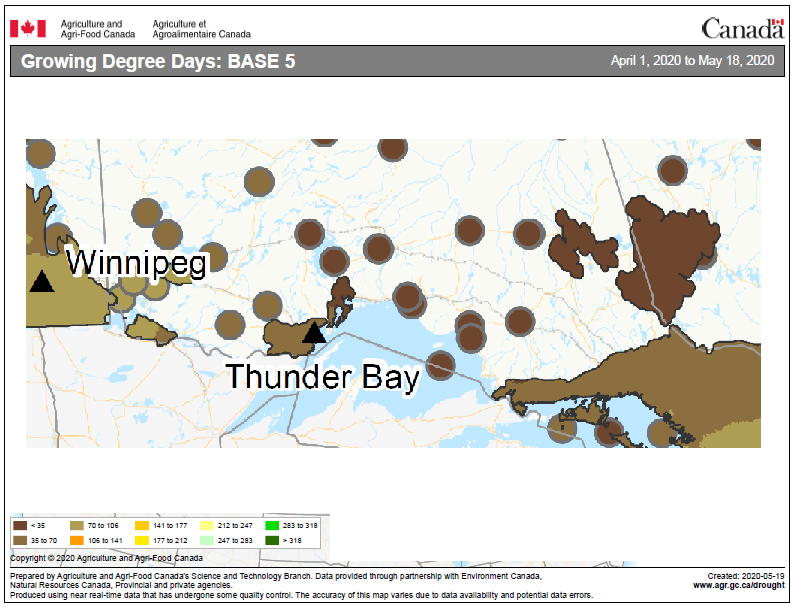 Seeding is well underway across the northern regions and some producers are all done. Acreage may be up from last year, especially in the northwest. Producers in the northwest have not yet had to deal with Swede midge but it is recommended that some traps be set up so we know if and when they appear. Swede midge will emerge at the end of May or beginning of June (in the northeast). Fields are most at risk of significant damage if they have low populations, low fertility, have had frost damage or flea beetle damage, or are slow growing for any reason.

Flea beetles emerge when soils reach 15˚C and canola is at risk up to 4-leaf stage. Insecticide applications for flea beetle control should not be applied until cotyledons and leaves have 25% damage. Feeding on stems is more damaging and should be monitored, but often they just feed on leaves. A participant mentioned that the mobile app Xarvio may help with % feeding damage estimations.

Corn grown under plastic in Thunder Bay and Temiskaming has been planted. Corn in the Algoma and Dryden areas is going in the ground now.

Lakehead University Agricultural Research Station in Thunder Bay is finished planting everything except soybean and flax trials. This is about a month ahead of last year’s planting dates.

Emo Agricultural Research Station has all their plots planted. Things are a little dry.

New Liskeard Agricultural Research Station is hoping to have most of their trials planted by the end of this week. The weather there has been very good, and the soils are working up well.

The Northern Ontario Farm Innovation Alliance has their field trials established for this year.

Reports out of Rainy River are positive, which is great to hear considering the very difficult fall season in 2019. Planting is nearing completion for all crops and soil conditions have been good. Fields that could not be harvested or tilled in the fall are now worked up and most is planted, even on land that is not tiled. Many cow herds have been turned out to pasture early because of lack of hay. Pastures that had adequate rest in the fall look reasonably good.

There has only been about a ½” of rain all spring so soils are becoming quite dry. The COVID-19-related provincial fire ban had been lifted but is now back in place because of the dry conditions. The night before the breakfast meeting air temperatures reached 28°C!

Approximately 70-80% of all crops have been planted. Canola acres continue to rise in the region over the past few years. In general, crops and field activities are a week behind last year. The region did not have much rain through the spring to melt the snow and warm the soil, so plants have been slow to green up.

Spring has arrived and most crops are in the ground including small grains and canola. Corn will be planted this week, and forages are showing signs of growth.

Temperatures have remained low and were at -2°C the morning of the breakfast meeting. There is still snow on north facing slopes and in ditches. Field work has just started this week, with some cereals being planted. Temperatures should be in the 20s this week with no rain and soils have been drying the past few days so producers are expecting to get a lot done this week. Oats, barley, peas, sorghum sudangrass and new alfalfa seedings will go in the ground this week. Overall conditions are about 2 weeks ahead of last year. With a stretch of good weather most farms in the region could all be seeded within about a week.

Producers have been concerned about their alfalfa crops because of lack of growth and cold temperatures, but taproots and crowns still looked healthy when last checked it’s just waiting for some warmth. There has been an increased in winter wheat in recent years. This spring much of the wheat did not green up early on and now stands are thin or patchy. Spring cereals have been seeded into the gaps or across thin fields. Crop seeding progress is about 70-80% complete with most of the remaining acres to be seeded to soybeans.

Some producers are done seeding crops and overall the region is about 80% done. Canola, oats and spring wheat have emerged. Winter wheat looks healthy with minimal winter kill and herbicide applications are going on now. Alfalfa fields also have good rates of survival through winter. Corn and soybeans are being planted now. Some rain would be advantageous as conditions are starting to turn dry.

Seeding of crops is about 40% complete but some areas are still too wet. The 2019 crops that were still in the field have been harvested. Corn planting is half done, and acres that are not completed this week may be switched to different crops.