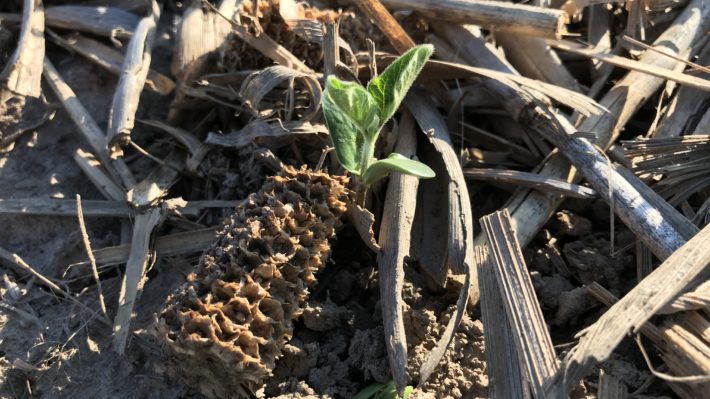 Warmer conditions starting late last week have fast-tracked crop growth. Rainfall during the past week has been sporadic with isolated thunderstorms resulting in flooded fields in one location and no rainfall less than a km away. Fields in many regions would welcome some moisture.

Listen to the audio version below or subscribe on iTunes, Google play or Spotify

Planting is completed and most corn planted between April 27th and May 7th has emerged, much of it in the same 2-day period. Earliest corn is at the 2-leaf stage.

Recent rains seem to have “tightened” soils and has resulted in some corn struggling to emerge and some uneven emergence. Variable emergence due to crusting and insect feeding will result in some replants. “Crust busting” with vertical tillage implements is being done but using a no-till drill or going through with the corn planter over the same row is often more effective. Wireworm is also showing up in some fields this year.  Some field assessments have documented up to 30% stand loss. The problem is worse in no-till/high residue and sandy situations.

Soybean planting is up to 90% complete in areas where soil conditions are fit to 20% planted in areas with fine-textured soils or significant rainfall. Beans planted on the weekend already have 3/4” root developed. Wide ranging experiences this year with planting conditions confirm that planting soybeans when soil conditions are fit at 1 ½ inch depth into moisture is the best strategy. Soybean emergence, especially where beans were planted into late harvested corn residue, is variable. Planter/drill setup to deal with the volume of residue was critical to proper seed placement.

Edible bean planting started on the weekend into good conditions. Azukis are more than half planted while other edibles are over 20%. Some growers are waiting another week because nighttime temperatures are forecasted to dip down to 3oC on the weekend.  Planting generally occurs between June 1st – June 15th. University of Guelph research shows no advantage to planting prior to June 1st. It is important to plant into moisture with no pounding rains in the forecast.

Winter wheat fields planted in September have advanced to flag leaf emerged or growth stage (GS) 37. At GS 37 and higher, the window has closed for herbicide application, but is perfect timing for T2 fungicide application.

Fields where 50 to 90 lbs N was applied, but 2nd N application has not occurred, can still stream on 28%. Application should not occur during the heat of the day but rather in the evening onto dry leaves. Where the flag leaf is exposed any burn would impact yield. Sulphur, manganese, boron and magnesium deficiencies have been reported. High nitrogen induces sulphur deficiency. For sulphur deficiency, often 10 lbs/ac of sulphur is adequate, however if ammonium thiosulphate (ATS) is applied, half of the sulphur is in elemental form, which will not become available to correct the deficiency in the current crop. Boron tests often report deficiency on wheat, but numerous rate trials have not shown response to boron.

Low levels of powdery mildew, septoria and tan spot are being reported, mostly in the lower canopy. Warmer temperatures (over 25oC) should help keep disease low but as temperatures cool, disease can move up the canopy quickly, especially in thick stands where there is moisture in the canopy. Stripe rust has been found in Michigan therefore scouting is important. If fields are one week away from T3 application with a moderately resistant or resistant variety to stripe rust, application can wait until the T3 application.  For more details on managing for stripe rust:  https://fieldcropnews.com/2017/12/effectively-managing-stripe-rust/

Triticale and winter barley are starting to head out. Spring cereals are at the 3-leaf stage with uniform stands. Critical weed free period is up to the 3-leaf stage so herbicide applications should occur as soon as possible.

Harvest of forage cereal rye has started and reported yields have been good.  Alfalfa growth continues to be behind normal. Growth in older forage stands is patchy with high dandelion populations. Grass growth is ahead of alfalfa and Italian ryegrass and orchard grass have headed. Some dairy farms on a 4-cut schedule will start harvest next week. There will be a compromise between quantity and quality. Scissors cut is a good method to determine the best balance for yield and quality. New seedings look good but are only just starting to push first trifoliate. Clover that was frost seeded into wheat is at the 2nd trifoliate stage although there are some reports that in some fields clover has only established in the rows.

Most spring canola is in the ground. Emergence might not have been great because it was dry in the shallow seed bed.

A lot of pre-emerge herbicides were applied this spring and for the most part there has been enough moisture for activation. However, with sudden onset of heat, quickly emerging crops will rely on post emerge herbicides. When applying in the post emergence window it is better to follow the stage of weeds rather than the crop. Don’t wait until proper crop stage if weeds are at the ideal stage for control.

Cool weather in April and early May have slowed N release from manure. N release based on temperatures to date are estimated to be only half to three-quarters of predicted. Manure types with low C:N ratio such as liquid hog manure or anerobic digestate will have a higher proportion of nitrogen available. 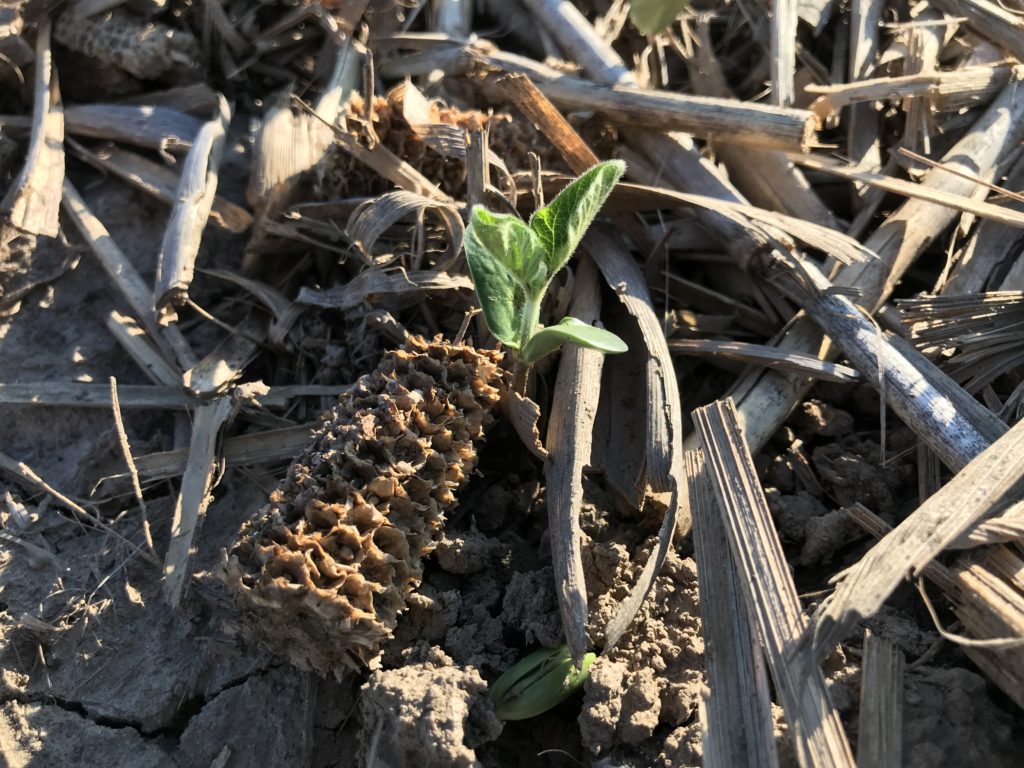 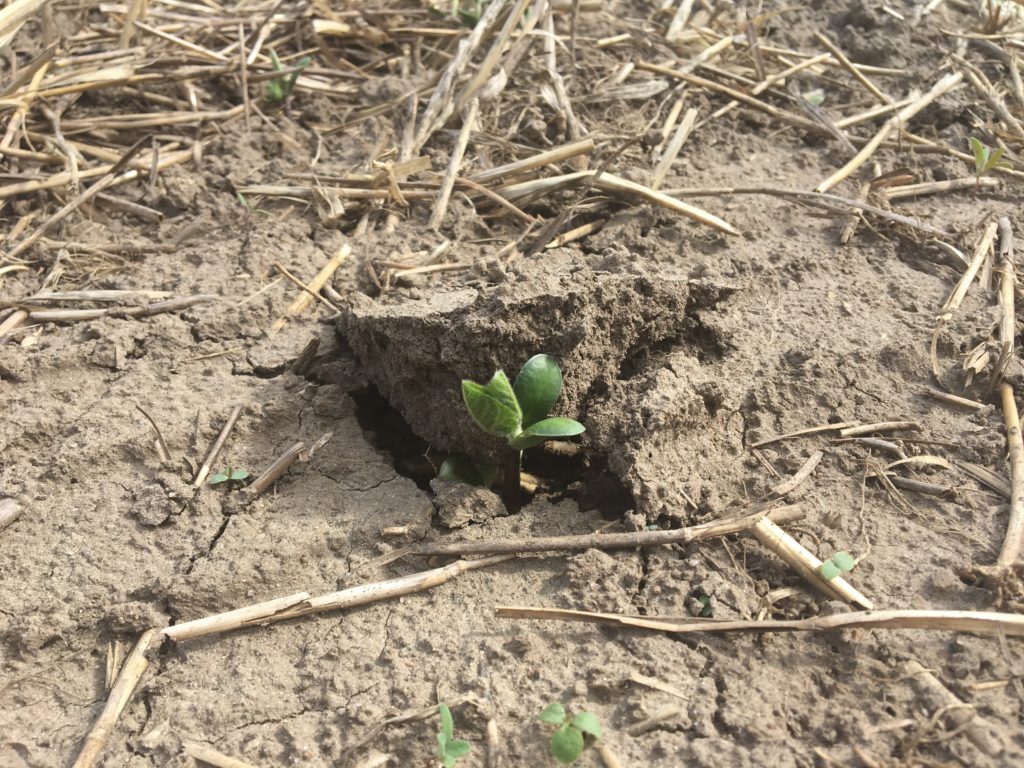 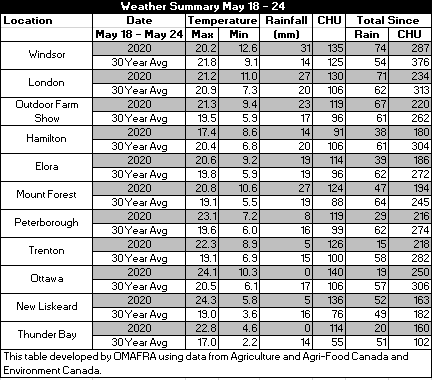