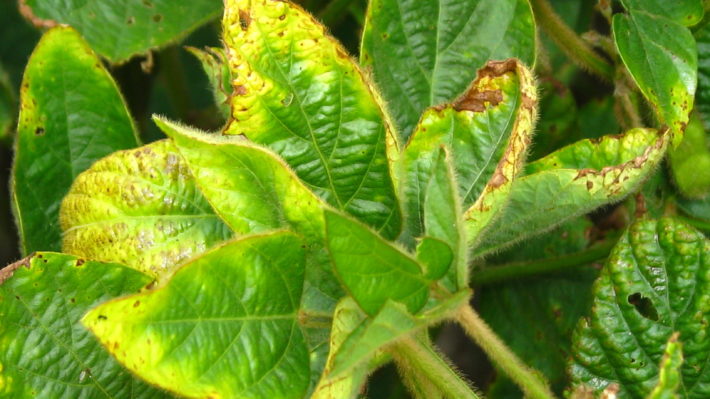 This was the last breakfast meeting for the Exeter and Mt Forest group. Thank you to everyone who has participated this season, and for adapting to the new Zoom format.

Crop advisors are getting a lot of questions right now about leaf wrapping and yellow flash on corn leaves. While this may look similar to herbicide injury, these symptoms being observed in many fields are what is called rapid growth syndrome. As corn plants entered V4 to V6, when the plant is preparing to grow rapidly, temperatures changed from hot to cool. With heat and moisture the corn will grow out of the leaf wrapping and chlorophyll will bring green colour to the yellow leaves. When growing out of the leaf wrapping leaves may tear or have a wrinkled look. Rapid growth syndrome is more apparent in some specific hybrids, and hybrids planted side by side can look dramatically different. It was reported that fields that were severely impacted by rapid growth syndrome last week are looking better this week.

Aside from rapid growth syndrome, many corn fields are looking variable. Crops are stressed from lack of moisture and periods of cool weather, as well as herbicide not metabolizing as quickly when conditions are cool. There may have been sidewall compaction at planting or could be compaction issues carrying over from the 2019 season causing issues now as corn roots expand beyond the seed zone.

The annual PSNT survey was completed 2 weeks ago and nitrate levels were normal to slightly above normal. While cool conditions might lead to assumptions that nitrogen has not been released in soils and PSNT results should be lower than normal, it is suspected that drier conditions have also reduced denitrification losses this year, resulting in higher soil test levels.  Where residual nitrogen credits from manure and legume crops make up a portion of the crop N needs, differences in N mineralization timing would make estimates from Agronomy Guide for Field Crops more accurate than PSNT.  When using the PSNT test in fields with applications of liquid manure, including ammonium (NH4-N) in addition to nitrate (NO3-N) will give more accurate estimate of crop-available nitrogen.

Thrips are being found in corn in some areas. They are a very small cigar-shaped insect and feeding injury on corn leaves looks similar to cereal leaf beetle feeding injury. The threshold is 8 thrips per leaf. Injury is more damaging where corn plants are stressed and growing slowly. Rain would likely relieve some plant stress.

Western bean cutworm (WBC) should start flying soon. Please add your WBC traps and weekly moth counts to the Great Lakes and Maritime Pest Monitoring Network. If you need further instructions on getting started with the Survey123 app see this instructional video.

T3 fungicide applications in winter wheat are done or nearly done. Diseases are starting to show up in spring cereals including net blotch in barley and crown rust in oats.

Producers should continue to scout for insects in cereals as well. Cereal leaf beetle continue to be found in winter wheat and spring cereals and true armyworm are at threshold in many regions (see more on these insects). Armyworm pressure is reportedly higher in wheat fields with other grasses present, and they will also feed in mixed forages. Moth flights extended through April, May and June so there are still some small armyworm larvae being found. Their behavior is sometimes unpredictable, and in some cases where they are above threshold they are not causing much defoliation damage. Be sure to scout diligently. The flag leaf must be protected to protect wheat yield. The effect of defoliation on yield is tied to the time at which defoliation occurs. Studies have shown that up to 75% defoliation can occur without yield loss, however yield will be lost if defoliation occurs prior to or during anthesis whereas defoliation during late grain fill stages will have minimal yield impact. Head clipping is uncommon but would cause greater yield loss, and again, maintaining the flag leaf is important. Samples are being collected to see if parasitism is occurring but reports of armyworm being parasitized have not been commonly noted to date. There are multiple insecticide options for armyworm.

Aphids are now being found in spring cereals. Prior to heading, the threshold is 12-15 aphids per stem, and the threshold increases to 50 per head after the cereals have headed out.  Some grass sawfly injury has been observed as well but it was noted that mice also clip stems and leaves and pile them up. Sawfly and armyworm do not feed on wheat heads, but mice do. Mice feces are often present where it is mice causing injury to cereals.

Regarding multiple insect pests, focus on the pest with the lowest threshold as they will likely be most problematic and require frequent scouting.

Kudos to those who are diligently looking for beneficial insects and parasites. It is important to factor these into pest thresholds. When insect pests reach threshold levels, in some cases it can be difficult to select an insecticide that protects beneficials. Matador is generally hard on beneficial insects but is the only control option for some pests.

Although some fields have started to flower the majority of the May planted crop is expected to start flowering over the next week.  Although soybeans are known to start flowering soon after the summer solstice as the days shorten due to the photoperiod effect, flower initiation is actually the result of a number of factors.  Temperature, plant size, variety and daylength all play important roles in determining when soybeans will start to flower. Cool temperatures or plant stress can delay flowering.  This year April planted fields have not started to flower yet.  In years with a warm spring early planted fields can start to flower well before the first day of summer (see more info on soybean flowering).

When root development is impeded by dry conditions or compaction, nutrient deficiencies become more obvious. Potash (K) and Manganese (Mn) deficiency are widespread this year. These two nutrient deficiencies have unique leaf symptoms. K deficient leaves turn yellow along the leaf margins while Mn deficient leaves turn yellow across the whole leaf except for the veins which remain green. A soil test is the only reliable way to know if a field is truly low in K or only showing stress-induced potash deficiencies. It’s also important to note that K deficiency symptoms may indicate soybean cyst nematode (SCN) feeding on the roots. When taking soil samples ask the lab to also test for SCN. If soil test levels are low for K broadcasting dry 0-0-60 can provide a yield response even when applied now as long as there is a rain afterwards. 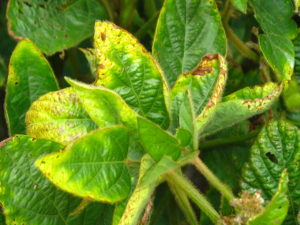 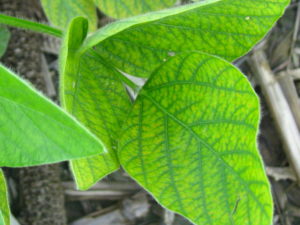 No soybean aphid populations have been reported to date in Ontario, but fields will need to be monitored. There are fields in Minnesota that have been sprayed, so aphid migrants will likely arrive over the next weeks with storms. Soybean aphid management is essential, especially when conditions are dry since yield losses are highest when plants are already stressed.

To date spider mite damage has been limited, but field scouting will be important as hot and dry weather favors mite development. Mites feed on individual plant cells from the underside of leaves leaving stipples. Severe stippling causes yellowing, curling and bronzing of leaves. Spider mites usually start on the edge of the field but wind can carry them to any part of the field. Fields that are close to neighboring winter wheat stubble, hay fields and no-till fields are more at risk. Four or more mites per leaflet or one severely damaged leaf per plant prior to pod fill indicates that control is required. Mites may also be a concern in corn this year given the dry conditions.

Bean leaf beetle are being found in low numbers in some areas, so keep an eye out for them as well.

There have been numerous reports of herbicide injury, mostly on fields where beans were slow to emerge, emerged during rain event, and because cool conditions may have reduced herbicide metabolism. There is more replanting this year than in the past couple years. Planting is now complete. Producers should watch for spider mites and install WBC traps on fields. 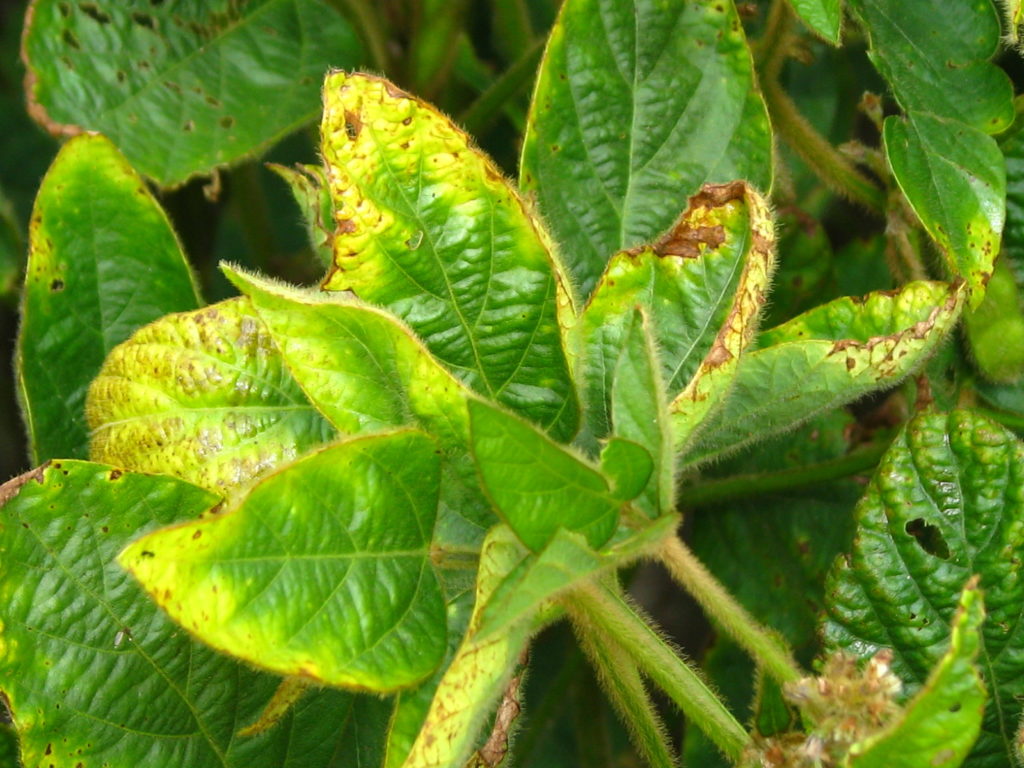