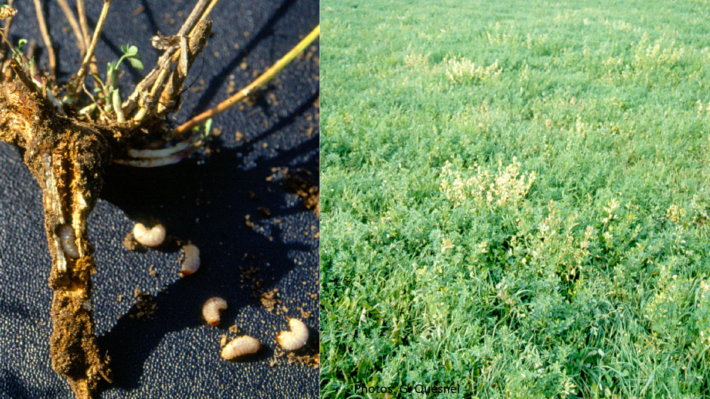 Christine O'Reilly January 11, 2021 642 Comments Off on What is the true cost of Alfalfa Snout Beetle on your farm?
Baute Bug Blog

**A note from Christine: Alfalfa snout beetle is an invasive species. A 2008 survey confirmed its presence in Leeds & Grenville, Prescott & Russell, and Stormont, Dundas & Glengarry counties. At that time, over 150 km2 were infested. Dr. Shield’s research on biocontrol nematodes was originally to help producers manage ASB, but more recent results suggest they are also effective against corn rootworm when used in conjunction with other best management practices.

It takes about 10 years for alfalfa snout beetle to become fully established on individual farms after its initial invasion.  ASB damage is frequently missed and stand loss is often blamed on winter kill, until there is a massive migration of adults out of a field or someone uses a shovel to dig yellowed plants in the fall and finds the larvae.  ASB often kill out the alfalfa on the high spots in the field first, a symptom which should draw attention from the truck windshield driving past.  The best time to survey a field/farm for ASB is during October with a shovel to dig and examine yellowing alfalfa plants.  At this time of year, ASB larvae are large, white and easy to identify.

ASB is flightless and has a 2-year lifecycle, so movement around the farm is by walking or hitching rides on farm equipment.  The practice of cutting an infested alfalfa field and then moving to a non-infested field next to harvest is the most common way ASB is moved around the farm.  During 1st harvest, ASB adults can be easily observed on the harvesting equipment.  Over the 10 year period, ASB causes more fields to die out from “perceived winter kill”, resulting in less alfalfa to harvest and more required off-farm purchases of replacement protein, so the increasing costs of feeding the cows is spread out over the 10 year period and often overlooked.

The cost of alfalfa snout beetle to the dairy operation is two prong and can be broken down into two different areas.

2)  The cost of purchasing off-farm protein to replace the alfalfa protein which is no longer available on the farm.

A more hidden cost of alfalfa snout beetle is the cost of the increased protein purchases to compensate for the lack of protein produced on the farm due to the loss of alfalfa from ASB damage.  The “off farm purchase protein costs” is directly impacted on the farm’s ability to manage the remaining grass in the field for high protein production. Below are presented various scenarios typical of northern New York farms impacted by alfalfa field loss from ASB.

Estimates are based on the diet of 30% forage and 70% corn silage. While many farmers claim to produce higher quality grass, analysis of grass forage suggests that the 15% and 11% protein cover the common range of grass quality.
Example costs for a 100 cow dairy.
These estimates were provided by Michael Miller, W.H. Miner Institute and Everett Thomas, Oak Point Agronomics

In summary, the cost of additional purchases of soy protein once ASB becomes establish on the farm ranges from $4.70 to $16.80/cow/ month or $56.40 to $200 per cow/year Add to this the cost of losing alfalfa stands and spending money to replant the stands and the cost per cow increases another $200-$500 /year and the loss to the dairy from ASB is significant. In NY, the “rule of thumb” is that it requires 1 acre of forage to support 1 cow.  As a result, the cost per acre and cost per cow of forages are often used interchangeably in discussions. This is the reason that money making dairies become under severe financial pressure within 10 years of ASB moving onto the farm.

Due to the long-term research support by the northern New York dairy farmers, Northern New York Agricultural Development Program, New York Farm Viability Institute, state of NY and Cornell University, ASB can be controlled on a farm for many years with a single application of native New York biocontrol nematodes (entomopathogenic) on each field.  The cost of this application is in the range of $40-$60 per acre.  The presence of ASB on your farm is costing you between $50-$200/year every year and the solution to ASB is a single expense of $40-$60; a one-time expense.  To date, nearly 28,000 acres of northern New York ASB infested land has been treated for ASB located on >140 farms.  In those fields, alfalfa stand life has increased back to 4-6 years compared to the previous ASB ravaged 1-2 years.

Northern New York farmers who have initiated a program of applying biocontrol nematodes to your farm, please continue because it is saving/making you money to control ASB.  In addition, talk to your neighbor about controlling his ASB because your control would be better if your neighbor was not producing millions of ASB to flood into your alfalfa stands.

Northern New York farmers who have not applied biocontrol nematodes for ASB control are bleeding profits and are spending unnecessary scarce money on purchases of soy protein when they could be growing it themselves.  In addition, you are creating a problem for your neighbor who is trying to control this insect and you need to work with your neighbor to control ASB for both of your benefit.

For more information about ASB control with biocontrol nematodes contact: