Winter wheat fields are experiencing snow mould in regions that had significant snow coverage and included but are not limited to Bruce, Grey, Huron, Perth and Wellington counties. Those fields effected were generally planted early and had lots of top growth. There are also varietal differences with more susceptible varieties showing more severe symptoms.

When and where does it occur?

Snow mould occurs in areas with significant snow cover on ground that doesn’t freeze or freeze deeply enough prior to the snowfall.  This snow provides insulation for the fungal pathogens that can survive in soil and on residue and allows them to grow on plants throughout the winter.  After the snow has melted, damp and cool weather is conducive for continued growth of the pathogens damaging the plants further.

Symptoms are typically patchy and appear after the snow melts in the spring.  In the case of severe infection, the growing point can be damaged eventually causing the plants to die. There are various types of snow mould that can occur including pink snow mould and speckled snow mould. In fields infected with pink snow mould, plants will turn pink while fields with speckled snow mould will look gray. The fungal growth can be seen right after the snow has melted and within a few days will appeared speckled from the dark fungal structures that form on leaves.

What yield losses can I expect?

In cases where infection does not damage the growing point, the plants should grow out of it as temperatures rise and plants continue to develop (Figure 1). In these situations, the impact on yield should be minimal. However, in cases of severe infection, the growing point may be damaged, and the plants will die. It is important in those fields to do an assessment once green up has occurred to get a handle on the impact across the entire field. Disease is generally sporadic and is found in patches throughout the field. When making assessments it is important to conduct a stand count in various parts of the field in order to determine the best course of action forward. If plant stems/crowns are “mushy” those plants are unlikely to survive, while stems that are firm but have diseased and/or dead leaves generally survive well. Looking for new white root growth is another early indicator. Information on making stand assessments can be found here: https://fieldcropnews.com/2019/03/assessing-for-winter-wheat-survival/ 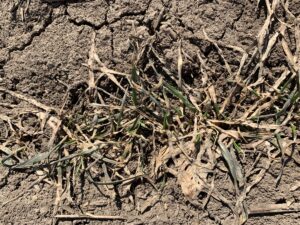 Figure 1: Look for new growth in plants affected by snow mould and cold temperatures when scouting fields this spring.

Unfortunately, there are limited in season options for managing these pathogens. Early nitrogen applications will not help plants overcome the disease.  Planting snow mould resistant or tolerant varieties is the first line of defense along with planting within your optimum planting range to avoid too much top growth in the fall.  Seed treatments and foliar fungicides have shown inconsistent efficacy and crop rotation is generally not helpful given the fungus’ ability to survive in the soil for long periods of time.