Winter wheat acreage is up by 8% compared to the 2020 growing season (Statistics Canada). In general, the winter wheat crop looks very good throughout the province. Cold weather caused some temporary leaf necrosis (leaf tip burn) in a few fields. This leaf burn is sometimes made worse when a herbicide is applied during such cold periods (Figure 1). Damaged plants often grow out of the injury within a few days. There have been reports of a few fields being terminated because of damage from snow mould, wireworm feeding and poor overwintering. However, such fields are outliers in an otherwise promising crop. 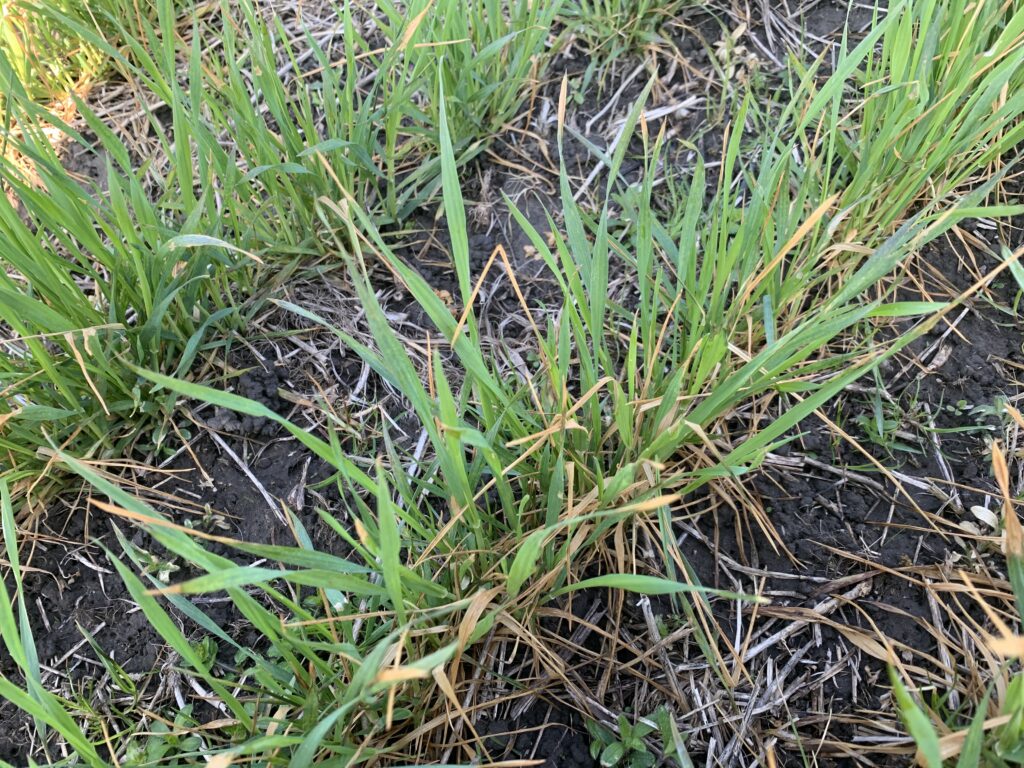 Leaf necrosis (browning) observed after a few days where the night-time temperatures reached 0°C or lower. This picture was taken in a herbicide trial where necrosis was more severe when an overlap rate of certain herbicides were applied. Historically, this injury has not resulted in yield reductions when occurring at growth stage 30 or less.

Much of the crop is at growth stage 31 (first node). Management of weeds, disease and plant growth regulation are now a priority for many fields. Delays in the delivery of some crop protection products combined with unfavourable spraying conditions (e.g. thunderstorms, high wind speeds) could delay these activities.

The majority of intended acres were planted into good conditions and are off to a promising start. Statistics Canada has estimated significant reductions in the planting intentions of spring wheat, oats and barley in 2021 when compared to the previous year.

Statistics Canada estimates that intended corn acreage will be up in 2021 compared to 2020. With light to medium textured soils being “fit” to plant, and with warmer weather, planting progress had begun at a reasonable pace throughout the first part of the week. Scattered showers during mid-week have suspended planting in some areas. 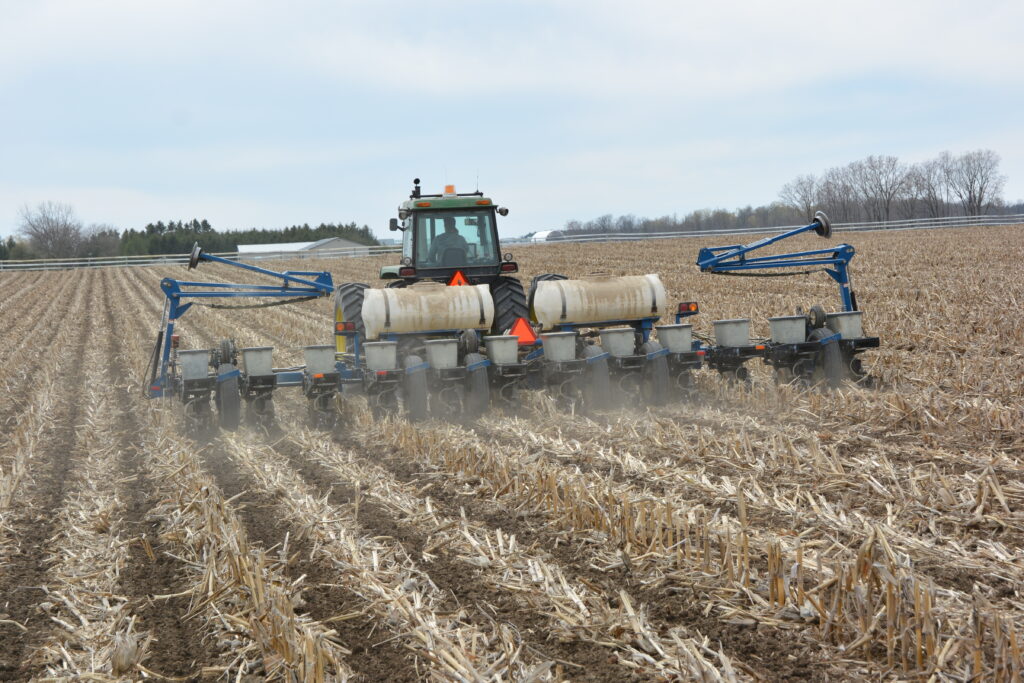 Corn planting had begun at a reasonable pace on lighter to medium textured soils. Above – corn being planted in a strip till system.

Intended acreage planted to soybeans will also be higher for the 2021 growing season. Although some farmers have planted a decent amount of their intended soybean acres in April, most farmers will plant corn before planting soybeans. The key consideration when planting soybeans early is that they are planted into good soil conditions and that a cold rain doesn’t occur within 24 hours of planting.

Winter canola ranges from the bolt to first flower stage, which is more advanced than last year at this time. Fungicides to manage risk of white mould are typically applied at 20-50% bloom. Commonly used products include Proline and Cotegra.

Producers should also be monitoring for cabbage seedpod weevil. There are often a lot of harmless insects in winter canola fields since they are one of the first plants to flower. It is important to avoid unnecessary insecticide applications to blooming canola. If cabbage seedpod weevil control is warranted (threshold is an average of 2-4 per sweep), the timing of insecticide often aligns with fungicide timing. A sweep net must be used to assess weevil populations in multiple areas of the field, not just field edges.

Cold weather from the previous week has caused some leaf tip necrosis in forage grasses but this is of little concern. In general, the alfalfa crop has overwintered nicely and should begin significant growth with higher temperatures forecasted for the beginning of May.