Winter of 2020-2021 was mild. Although snow cover was less than normal, there were relatively few thaws. A rapid thaw in early March melted most of the snow. The warm temperatures persisted for a few days, allowing perennial forages to break dormancy.

Dry conditions throughout March with warm days and cool nights provided a window to frost seed that lasted about two weeks.

Growing degree day accumulation was much faster than normal (Table 1) which sped up crop development. In many parts of the province it was possible to assess winter survival in alfalfa much earlier than usual. Reports indicate that winterkill levels are minimal, due to a combination of factors:

The same weather conditions that supported good alfalfa survival also contributed to healthy stands of winter cereals, which will help boost forage inventories ahead of first cut. Weather conditions have been excellent for spreading manure. Reports indicate that more fertilizer has been applied to forages this year than normal.

Cooler conditions towards the end of April slowed forage growth. Although there was some snow and frost across the province the week of the 18th, the only damage reported was superficial frost injury on the leaf tips of grasses and leaf margins of alfalfa. Details on scouting frost damage in alfalfa HERE.

Despite some rain the week of April 25th, most of the province was drier than normal throughout April, except for northwestern Ontario which received above average precipitation (Figure 1). 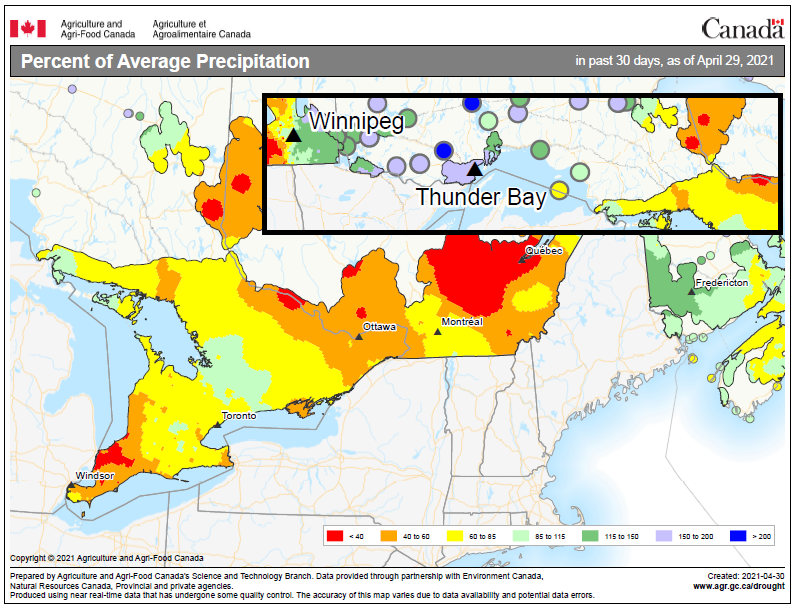 Growing Degree Day (GDD) and precipitation accumulation as of April 30, 2021