The entire eastern region received no more than 4 mm of rainfall in the past two weeks. Dry conditions were a theme throughout all topics of discussion. 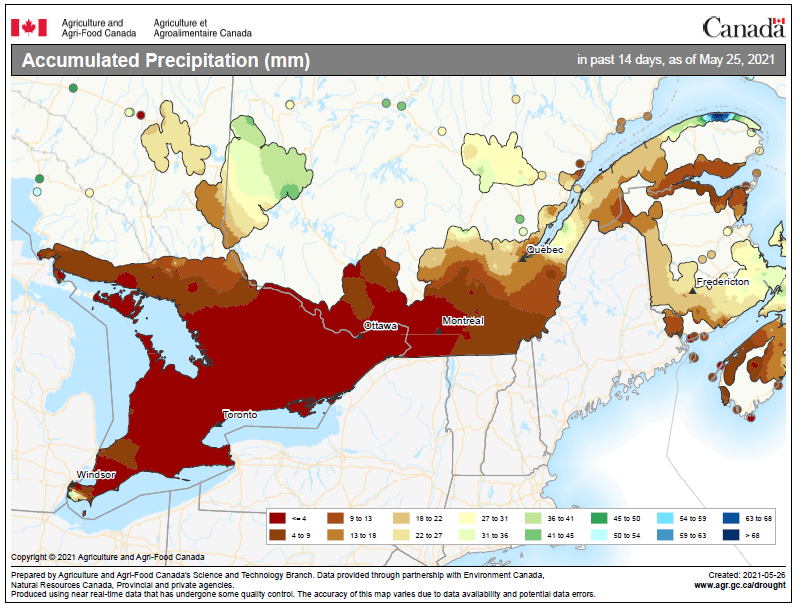 First cut has started for producers targeting “dairy quality” forage. Early reports suggest yields are good. This is mostly credited to how well alfalfa overwintered (dense stands), and the focus on fertility earlier this spring. Some fields are shorter than expected, which may be a result of last year’s management decisions. Fertility, if a nurse crop was used during establishment, and whether the stand was cut during the fall rest period all impact the yield potential this year.

Potassium deficiency has been identified. Manure applications are typically capped based on nitrogen and phosphate levels, so do not meet alfalfa’s K requirements. Agronomists are encouraged to involve the producer and the nutritionist when planning K applications on dairy farms so a clear plan can be developed to maximize production in the alfalfa and avoid milk fever in the cows.

Alfalfa weevil has been found in both Kawartha Lakes and the Ottawa Valley. Thresholds vary with alfalfa height but cutting is the preferred control option.

The dry conditions have slowed pasture regrowth. Paddocks will need a longer rest period to recover between grazing events. This can be achieved by adding more acres for grazing, feeding supplemental forage, or a combination of the two.

Spring canola in Renfrew County has emerged and looks good so far.

Corn planting seems to be over 90% complete across the region. Some stands that were planted before the cold snap in late April/early May seem to have some distorted growth as a response to cool, wet conditions. There is a Field Crop News article compiling decision tools, research, and recommendations to help growers decide if corn fields should be replanted, and how to terminate the existing stand.

Fields established after the cold snap are at a similar maturity to the earlier planting date, but growth appears normal. These fields are emerging in less than a week.

Soybean planting is also nearly complete. Beans that were seeded into moisture are generally doing well. Some fields are having issues with emergence and stand uniformity, either because of crusting, heavy residues, or planting . There are fields that appeared dry on the surface at planting but were still wet lower down, resulting in sidewall smearing (or sidewall compaction). Seed trench issues tend to have harsher consequences in dry years, and some soybean stands are feeling those.. The lack of rain in the last 2-3 weeks resulted in some beans being planted into dry soil, which may also cause stand and uniformity issues unless a good soaking rain can equalize soil moisture across the field.

The earliest planted beans in the region are at unifoliate stage.

Bluegrasses can be difficult to control if they get too mature. Timing is key to take annual bluegrasses out of cereals.

It can be hard to match weed development and height under dry conditions. Focus application timings on the critical weed-free period in corn and beans. Check product label for tank-mix guidance.

When considering pre-emergence herbicides in soybeans, there are risks associated with adding 2,4-D, particularly if Canada fleabane is not a concern. There is a crop safety risk if 2,4-D is applied more than three days after planting. While including 2,4-D may improve control of lambsquarters and ragweed by taking out very tiny seedlings, under these dry conditions the risk of injuring the beans is high. Blackhawk needs to be applied no later than three days after emergence. In practice, growers should aim for no later than the day after planting.

There has been an increase in participation in crop insurance in the region this year. To date, very few damage reports have been submitted. May 31st is the deadline to apply for, make changes to, or cancel coverage for spring-seeded grains & oilseeds and new forage seedings. The full list of Agricorp program deadlines is available on their website.

OMAFRA and partners are conducting the pre-sidedress nitrogen survey again this year. Measuring soil nitrate will help us understand how weather conditions have affected soil nitrogen supply compared to past years. We will be looking for: corn fields, with less than 30 lbs N/ac applied with the planter (no manure, no broadcast N). If you have a field that fits this description, contact Sebastian Belliard in the East, Christine O’Reilly in Central, or Ben Rosser for general inquiries.

The OMAFRA Soil Team is looking for CCAs to participate in a pilot project for the Soil Health Assessment and Plan tool. The project will pay for analysis of soil samples taken and submitted by participating CCAs. Those who are interested have until June 15th to sign up by contacting Sebastian Belliard.