Current weather patterns are generally expected to hold for the next week or so. This will allow for planting of corn and soybeans to be mostly complete by the last week of May, though many fields and farms will appreciate some rain soon, particularly in the far southwest (Figure 1). Significant precipitation is possible in the next two weeks, but percentage chances are still low and uncertain. 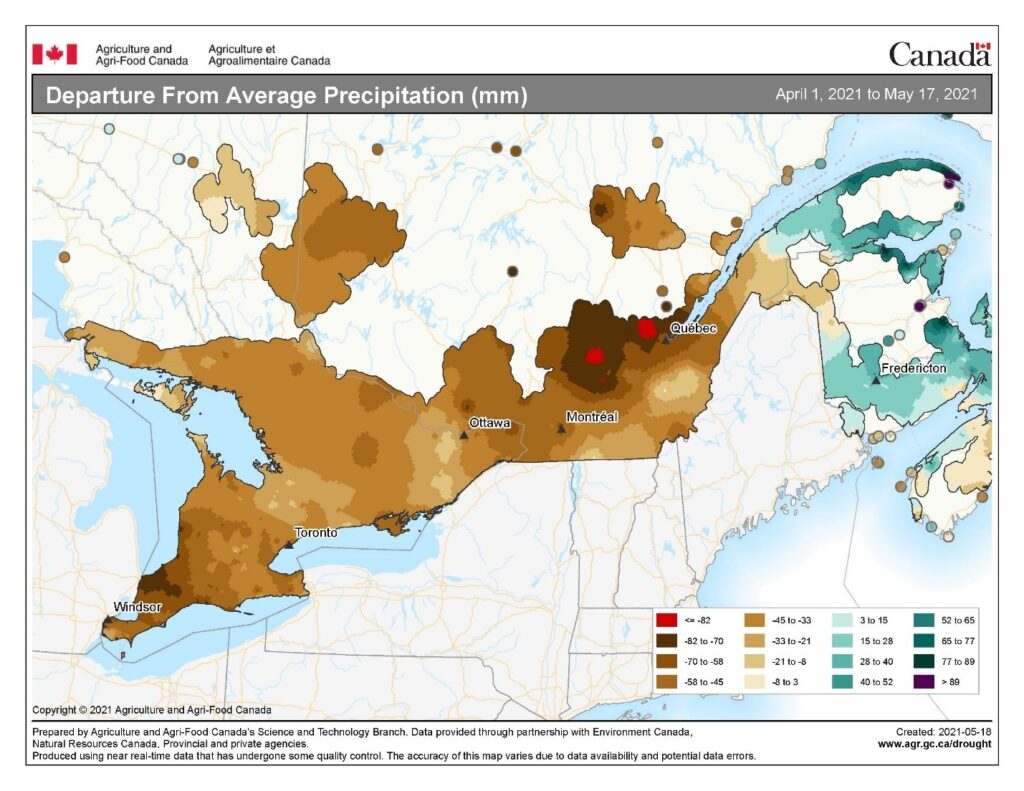 Some areas of the province are seeing high powdery mildew pressure in certain susceptible winter wheat varieties. Management decisions should be based on the severity and on protecting the flag leaf. If the disease slows down with warm, dry weather and doesn’t move up the canopy, intervention can wait. If growing a susceptible variety and the disease is getting close to the flag leaf, growers should consider a fungicide application before T3. Susceptibility ratings for specific varieties can be found on the “head-to-head” page from the Ontario Cereal Crops Committee. Powdery mildew symptoms on the flag leaf (1% of the leaf) and the second leaf (3%–5% of the leaf) require immediate attention, especially if prolonged wet, humid weather is forecast.

As flag leaf emerges in winter wheat across the province, the crop is approximately 250-275 GDD from pollination and T3 fungicide timing. Application should be targeted for day 3 (three days after 75% of heads in the field have fully emerged.

Cold temperatures kept sprayers out of action in some areas of the province. Those still considering herbicide applications should keep an eye out for flag leaf emergence. If flag leaves are present, it is best to skip the spray in order to avoid injury to the flag leaf and significant yield loss that can accompany it.

Spring cereal growth was slowed during the cool early weeks of May, and so may still be in the critical weed-free period (up to third leaf, GS13). Annuals are emerging and should be controlled.

Cereal leaf beetle (CLB) is showing up in some winter wheat fields. As spring cereals emerge, CLB adults and larvae will move to these fields and scouting is recommended. Recent observations are indicating that CLB are particularly fond of oats. Control is warranted if an average of 3 larvae per tiller are found before boot stage. One CLB adult or larvae per stem warrants control after boot but prior to heading. If significant feeding is taking place on the flag leaf in the early heading stages, control may be warranted. Natural enemies are highly effective at controlling this pest. For the safety of these natural enemies, chemical control is not recommended unless pest population exceeds the action threshold. The Cereal Leaf Beetle Survey is being conducted again this year and agronomists are invited to participate.

Some fields are showing deficiencies in sulfur (S) and manganese (Mn), and remedial applications should be considered. Deficiencies in S are most common in low organic matter and coarse soils, while Mn deficiency is often found in high pH and dry soils. For S deficiency, optimum application rates are 10-15 lb/ac of actual sulfur as ammonium thiosulfate or ammonium sulfate. Foliar applications are recommended for Mn, with optimum rates provided from 8 kg/ha (7 lb/acre) manganese sulfate in 200 L (53 gal) of water. Use a “spreader-sticker” in the spray. Fields with manure applied might still show S deficiency as low temperatures (first half of May) result in slower mineralization of organic S. The same conditions control the rate of transformation (oxidation) of elemental S to plant-available sulfate.

Soil Insects in Corn and Soybeans

With warmer soil temps, grubs and wireworms have been very active at the soil surface. Any early planted seeds that have been slow to emerge could be at risk of feeding injury. Recent temperatures have helped to push the crop out of the ground, though dry conditions can also slow this and give these pests more time to feed on roots and seedlings.

The corn crop will be mostly planted by the fourth week of May. During emergence, evaluating the uniformity of emergence and development can be used to assess planter performance. If late emergence or variability is observed in the row, try to determine the cause(s) – planting depth, residue interference, seedbed quality and seed-soil contact can influence emergence. Any issues should be noted and addressed next season with equipment or operation changes where appropriate. As plants progress to V3 and nodal roots take over, stand variability may be caused by compaction or smearing in the seed trench limiting root access to moisture.

Corn will be in the critical weed-free period between V3 and V10. Although lack of rain for activating pre-emergence herbicides will reduce their effectiveness, research has shown these products will still provide some control and are still useful for decreasing weed pressure and the burden on post-emergence weed control.

Growing degree days are advancing much faster than this time last year. Black cutworm traps at Ridgetown captured 9 moths on April 12. 8 moths’ or more is the biofix date when we start to calculate GDDbase10.4C for black cutworm development. Prediction models estimate that corn cutting is a risk once approximately 156 to 184 GDD10.4C have accumulated. Based on forecasted temperatures, cutting won’t take place for at least another two weeks. Corn is most vulnerable to cutworm cutting prior to V5 stage.

As soybean planting continues, concerns about soil moisture deepen in some areas. Soybeans should be planted ½” into moisture, with the ideal depth being 1 ½”. Moisture is the more important factor, however, and trials have shown that soybeans can be planted as deep as 2 ½”. While deep-planted seed takes longer to emerge, warm temperatures in the forecast should accelerate germination and emergence. Deep planting is generally less risky in lighter-textured soils, with seedbed quality becoming more important as clay content rises.

Excessive tillage has contributed to moisture concerns in some fields by causing excessive evaporation before seed could be planted. In an average year it would also increase the risk of crusting, though pounding rains are generally not anticipated in the forecast and temperatures should be conducive to rapid emergence.

Land rolling can help to reduce evaporation, in addition to facilitating soybean harvest. While rolling is typically done soon after planting, field trials in Ontario have shown that soybeans can be rolled after emergence. Unifoliate up to second trifoliate stages are safest, especially in the afternoon when the heat of the day makes soybean stems more pliable and likely to recover. Avoid early stages and anything past second trifoliate, when risk of excessive plant injury and stand reduction are highest.

Early first cuts have started. This is earlier than the typical May long weekend timing, which may be due to tight inventories. Yield will be lower from early cuts while quality will be high, but in some cases, this is a necessary trade-off.

Keep an eye out for alfalfa weevil damage as some fields have reported activity. With lack of rain, plants might not advance quickly enough to avoid damage. If there is 40% leaf-tip feeding, with 2 or 3 active weevils per stem, and there are more than 7–10 days to preferred harvest date, consider applying an insecticide. Natural enemies are generally highly effective at controlling this pest. For the safety of these natural enemies, chemical control should not be considered unless pest population exceeds the action threshold. Registered insecticides can be found in Chapter 3 of Publication 812.

It has been noted that in mixed stands grasses have outgrown legumes. If feed quality is important, these fields should be harvested when the grass is ready in order to maintain the protein content of the feed. Cereals are best harvested for baleage between flag leaf and boot stage.

Manure should be applied to forage as soon as it is harvested. Damage to regrowth is minimized when trampled less than 48 hours after harvest, though in a pinch it can wait up to five days.

The new ONForageNetwork.ca website is the online hub for forage, pasture and biomass crop production in the province. Here you can find information on seeding, growing, harvesting, storing, and marketing these crops. The network is a partnership between the Ontario Forage Council, the Ontario Hay & Forage Co-op, and the Ontario Biomass Producers Co-op.

Spring canola is being planted and should be in the ground by the end of May. Flea beetles have been active. The threshold for treatment is 25% defoliation. (FCN)

Dry weather such as we’re experiencing will cause weeds to grow shorter. This should be considered when timing herbicide applications – focus on growth stage rather than height.

Dry conditions have also resulted in reduced control from soil-applied pre-emergence herbicides. Scouting fields for escapes 14 to 21 days after pre-emergence application will provide a much better chance for dealing with them effectively with post-emergence weed control.

Bluegrass seems to be a growing concern in a number of fields. These grasses are challenging weeds, and these fields should be flagged and prioritized for fall management.