Dry conditions continued over the two weeks since the last meeting. Rainfall was patchy over the region, with some areas getting “just over an inch” and others nothing at all. Those that got rain reported crops continue to look good but could use more. Crops that missed the rain are starting to show a bit of moisture stress on knolls and shallow soils.

Frost hit over the last weekend in May. Some areas only had one night of frost, while others had up to three, and frost coverage was spotty. Severity also varied. Frost from Lindsay down to Cobourg was mostly superficial. The area from Warkworth to Madoc and down to Belleville had some damage. There was an arc of frost damage from the Ottawa River down to Saint Isidore and west to Winchester. 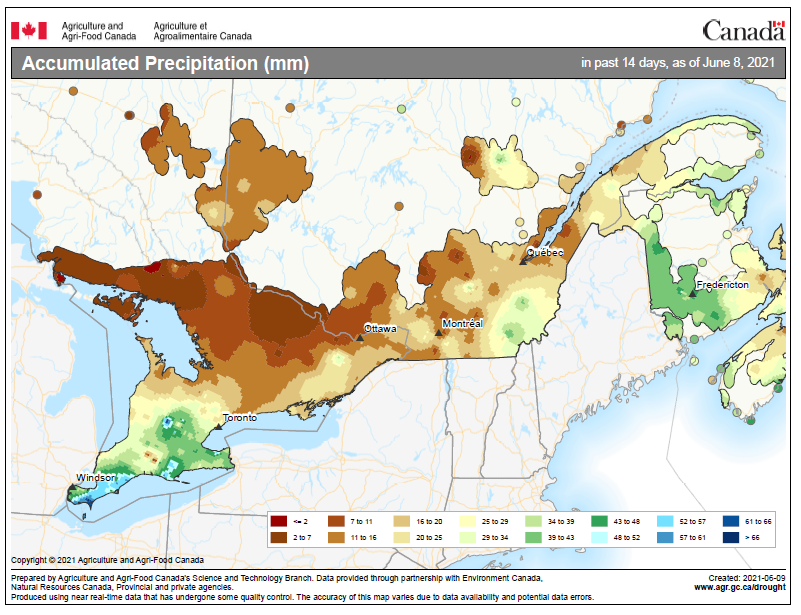 Where there was rain in the week before forage harvest, there is a risk of high nitrates in the crop. High nitrates increase the risk of silo gas production. Silo gas can be deadly! It is heavier than air, so tends to accumulate on the ground around the silo. Silo gas may be reddish/orange or invisible. Gas production starts during silo filling, and the highest risk time is up to six weeks after. More information on silo gas safety can be found here.

Agricultural retailers mentioned that it is difficult to find qualified sprayer operators. The staff they have are working long hours trying to keep up with demand, especially as the ideal spray timings overlap on many crops this year. Taking breaks, getting enough sleep, and not rushing through jobs is critical in keeping people safe around heavy machinery.

Winter wheat has headed out. Spraying for T3 fungicide is wrapping up this week. Some fields in the province are experiencing powdery mildew, which thrives in a humid canopy. Winter wheat is vulnerable to heat during pollen development. Temperatures above 33 degrees C will cause pollen viability issues. Luckily, cooler temperatures are forecasted in time for grain fill, though rain is still needed.

Spring cereal development is progressing quickly with the hot weather. Aphids may be moving from the winter wheat crop into spring cereals, so growers should scout for them.

Many are finding fall rye to be good choice as a grain or forage alternative and with continued experience and success are dialing it in to their rotation. Rye is relatively easy to grow and offers rapid growth and overwintering soil erosion protection. Planning for what follows rye is important in terms of crop and tillage selection. Have plans that trigger based on a wet or dry spring and variably for corn vs soybeans.

Most first cut yield reports continue to be higher than last year, although variability is noted. On dairy farms, first cut is 90% complete.

Where there was rain the week before harvest, there is a risk of high nitrates in forage. Excellent conditions for manure applications last fall and this spring, plus an emphasis on good fertility for the hay crop have increased nitrogen levels in forage fields. A flush of water after this dry spring can bring nitrogen into the plants faster than they can turn it into protein. In addition to increasing the risk of silo gas (see Farm Safety above), high nitrate levels can cause nitrate poisoning in livestock. The forage nitrate test is not a part of the basic forage analysis package, but labs offering forage analysis will usually test for nitrates if asked. Share the results with the farm’s nutritionist to determine if and how the forage is safe to feed.

Insect pressure is building in the hay crop. The hot, dry weather has enabled alfalfa weevil to get ahead of the fungi that normally controls the population. Producers need to scout fields after first cut to ensure weevils are not above threshold on the regrowth. Potato leafhopper populations will likely develop quickly with the hot weather. Thresholds for both insects change with crop height. Find more details on managing these alfalfa pests here.

Pasture regrowth continues to be slow with the dry conditions. Paddocks will need long rest periods to recover fully before being grazed again.

Corn stage is variable across the region. While most seems to be in the 3- to 5-leaf stage, there are fields that are just emerging and others that are as advanced as 8-leaf stage.

Frost damage on muck soils may result in replanting. Justin Brennan shared a photo (Photo 1) of a lone surviving corn plant in an area of a field that was hit by frost. While we cannot know for sure why it survived, possibilities include:

Soil nitrogen supply (mineralization, loss) can be influenced by weather (soil temperature, moisture) each spring. OMAFRA leads an annual Pre-Sidedress Nitrogen Test (PSNT) survey to gauge year-to-year levels across Ontario. PSNT soil samples were collected from 93 sites across Ontario from May 31st to June 2nd, 2021. The average PSNT value was 13 ppm, which is similar to the long-term average of 12 ppm, suggesting soil nitrogen supply is similar to normal in 2021. Optimal nitrogen (N) rates are a function of both soil N supply and corn yield. Consider both when determining N rate requirements in 2021. PSNT survey results (available here) are a general indication of soil N status across Ontario, not a substitute for sampling your own farm.

Soybeans on average are at second trifoliate, though staging is variable as in corn, ranging from emerging cotyledons to 3rd trifoliate.

Estimates from retailers suggest that between 10,000-12,000 acres of soybeans will need replanting due to frost damage across the region. Replant decisions are being influenced by the dry weather. In some areas it is not possible to seed into moisture right now. Growers with low soybean populations may hold onto those stands rather than risk replanting into dry soil.

Dry conditions since initial herbicide applications have impacted the performance of some programs, notably where pre emergent herbicides have yet to receive the rainfall needed for activation. Weeds emerging before rainfall may not be controlled, but with rain to activate those products, new germinations should be controlled.

Resprays are continuing though to control weeds that are emerging. This is putting additional pressure on spray rigs as corn and soybean weed control needs are overlapping with T3 fungicide applications in winter wheat.

Weed escapes on IP soybeans are particularly problematic due to the lack of post applied alternatives available.