Insect surveillance was conducted in winter canola in Ontario for the 2020-2021 season to monitor the type and number of insects that inhabit this crop. There were 13 fields surveyed in Wellington, Huron, Grey, Chatham-Kent and Middlesex counties. Sweeps were taken from 10 different areas of each field both at the perimeter of the field and in the interior. A sweep consisted of a 180° movement from shoulder to shoulder across the tops of the plants and this was done 10 times in each area during the full flower stage. The most abundant insects that were found include cabbage maggot flies, seedcorn maggot flies, Hydrobaenus midges and flea beetles towards the end of the flowering period.

The cabbage maggot fly (Delia radicum) and the seedcorn maggot fly (Delia platura) are pests of Brassicaceae crops such as canola, broccoli, cabbage and kale that can reduce yield by crop root feeding. Cabbage maggot flies affect Brassicaceae crops specifically while seedcorn maggot flies target a wide variety of crops including Brassicaceae, corn, soybean and more. The larvae of these flies can cause yield-impacting damage when they feed on roots and burrow into emerging seedlings, creating extensive tunneling in the roots of the plants. This may result in stunting of plant growth through reduced branching or killing the plant. It is important to check the roots of canola plants for tunneling when there is an abundance of these flies. Though these flies were one of the most common insects found in this surveillance, the lack of tunneling in the roots indicated that there wasn’t significant damage caused by them. 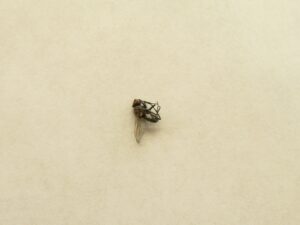 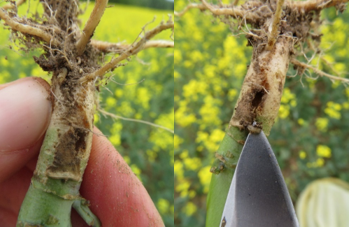 Midges of the Hydrobaenus species was another abundant type of insect found in this survey. It is a very small insect not specific to canola or Brassicaceae crops and it is not a pest of canola. 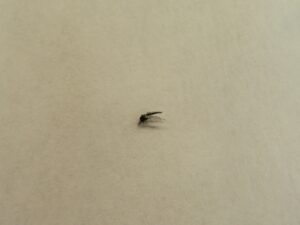 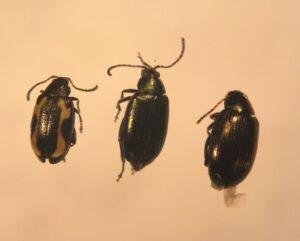 Cabbage seedpod weevils are a known major pest of canola that can cause significant economic yield loss through larval feeding on seeds in developing pods and increased shatter loss. Cabbage seedpod weevils were found in this winter canola survey at an average of 14.6 weevil per 10 sweeps over the 5 fields that weevils were caught. This is below the threshold of 20 to 40 weevils per 10 sweeps and therefore the fields were not treated with insecticide to target this pest. 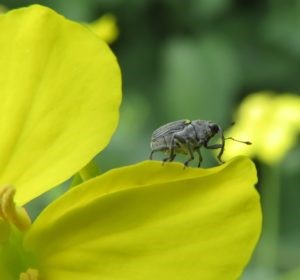 This survey was additionally conducted to search for the pollen beetle Brassicogethes viridescens which is a canola pest in the Maritime provinces and Quebec. It is an insect proposed to move westward and thus this survey is used to determine if it has moved to crops in Ontario, and if it has, to what degree. Currently, very few beetles that resemble pollen beetle were found across the 13 fields and identification for 2 beetle samples are underway.

This insect survey provided insightful information for the winter canola crop being grown in Ontario and provides guidance on pests to monitor for in the future. Further information about the insects mentioned in this article can be found in the references.