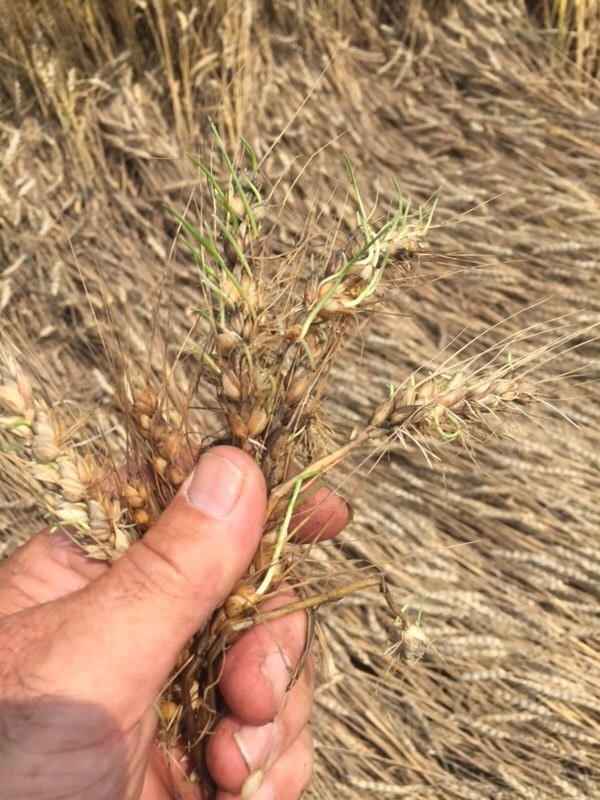 While winter wheat yields have been strong this year, there have been some challenges with quality. Pre-harvest sprouting and low falling numbers have been a concern along the wheat value chain. While this is not an issue every year, it is important to understand the challenges with pre-harvest sprouts and low falling numbers from an end use perspective, and what can be done to reduce the risk.

Pre-harvest sprouting is the initiation of grain germination prior to harvest (Figure 1). Why is that a bad thing? When sprouting occurs, alpha-amylase is produced which converts starch into sugars that fuel seedling growth. High alpha-amylase in the grain can have varying effects on the processing of wheat products. In high moisture, batter-based products high alpha amylase can negatively affect quality, while high fat and sugar doughs can tolerate higher levels. The added challenge is that mills produce many kinds of flours, so the logistics of dealing with high alpha amylase and low falling numbers is complex.

Falling number is a standardized testing method for determining the amount of sprout damage or more specifically, the structural integrity of the starch chains. Wheat is ground and mixed with water in a test tube to create a slurry. The test tube is heated for 60 seconds at which point a plunger is dropped. The plunger is timed to see how long it takes to fall to the bottom of the tube or a specified distance and this number (in seconds) is the falling number.

Wheat is considered sound and satisfactory for most milling and baking processes with a falling number of about 300 seconds; however, levels as low as 250 can be acceptable to end users. While growers are given a grade based on sprouts, mills are increasingly looking at falling numbers as an indicator of wheat quality. As a result, growers are encouraged to review all contracts to ensure they are aware of falling number or any other quality requirements upon delivery of grain. 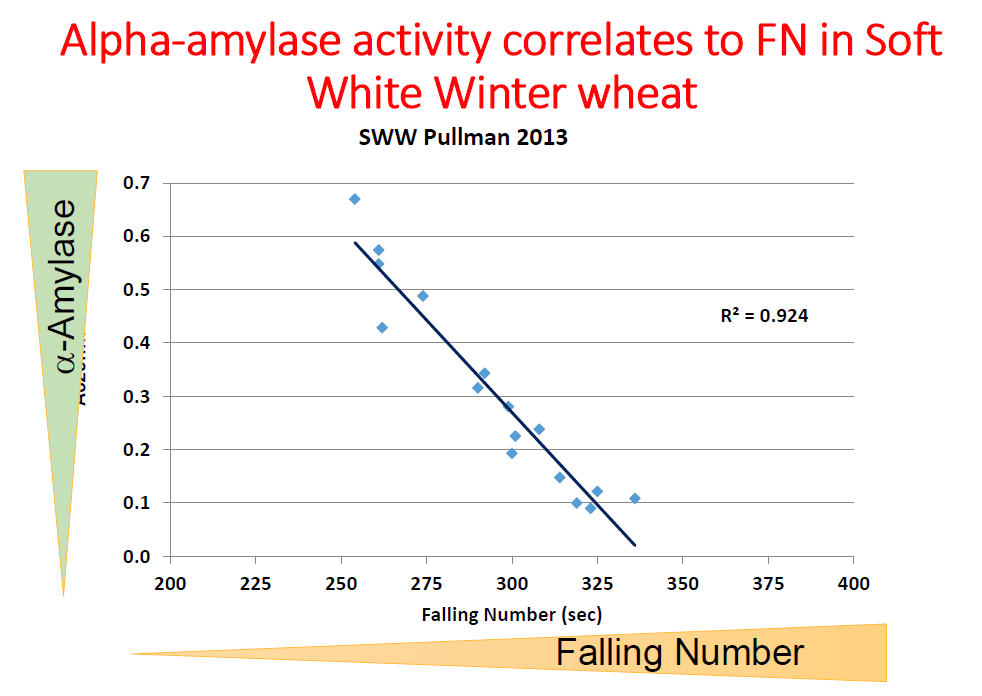 Pre-harvest sprouting is initiated by cool, rainy conditions once wheat has reached physiological maturity. When there are multiple rainy days in a row, there is an even greater risk for sprouting, even for varieties with good sprouting resistance. Hard red wheat is generally more tolerant to pre-harvest sprouts while soft white wheat is extremely vulnerable. In 2021, many areas received persistent rainfall once wheat reached physiological maturity, likely resulting in increased sprouts and low falling numbers. Additionally, there were many fields that were lodged which also increases the risk of pre-harvest sprouting.

In addition to sprouting, low falling numbers can also be caused by late maturity alpha-amylase (LMA). LMA production is triggered by cold or heat shock during the later stages of maturity (26 to 30 days after pollen shedding). The specific temperature swing needed to induce LMA is not yet clear. In late June and early July, some areas experienced cool night temperatures which may have been enough of a “cold shock” followed by many rain events to stimulate alpha-amylase production even in the absence of visual sprouts.

Reducing the Economic Losses to Low Falling Number and Sprouts

The best defense against sprouting and low falling numbers is to harvest wheat as quickly as possible once it reaches maturity. Harvesting early and drying your grain can be an effective means of avoiding sprouting. Selecting pre-harvest sprouting resistant wheat varieties can also help reduce risks. Red wheat tends to be more tolerant than soft white wheat which is why when planting soft white wheat, plant no more than what can be harvested in one day. Avoid mixing wheat with low and high falling numbers. This will not result in a better falling number. Sprouted wheat or wheat with a low falling number should be kept separate from sound wheat.

Seeding rates should be increased to compensate for lower germination and vigor. Given the reduced vigor, planting depth should be no more than 1″ and consider a seed treatment. Consider using sprouted seed in earliest planted fields to help avoid a prolonged or delayed emergence as growing degree day accumulations begin to slow.