The OMAFRA Field Crops team has completed the survey of the 2014 Ontario corn crop to determine ear mould incidence and the occurrence of mycotoxins in the grain. These mycotoxins, particularly vomitoxin (DON) produced primarily by Gibberella/Fusarium ear moulds, are grading factors and can be disruptive when fed to livestock, especially hogs.
202 samples were collected from October 14 to October 17, 2014 from corn fields across the province. In each field, 2 random areas were selected: in each area 10 consecutive ears were hand harvested and bagged. In fields with several hybrids, representative samples were taken from two areas for each hybrid (maximum of 4 hybrids per field). The 20-ear samples were then immediately dried and shelled. The resultant sample was thoroughly mixed and a sub-sample provided to A&L Laboratories in London for vomitoxin (DON) analysis.

RESULTS:
66 % (134) of samples had a DON level of less than 0.5 PPM; 25 % (51) had DON concentrations of 0.5 to1.9 PPM; and 9 % (17) were found to have DON levels of 2.0 PPM or greater. These results show an increase in vomitoxin levels compared with the 2013 survey where only 2% of the samples registered a DON level of more than 2.0 PPM. In contrast, in the 2011 survey 23% of the samples registered 2.0 PPM DON or higher.
With 91% of the samples testing below 2.0 PPM it appears that the 2014 corn crop should be able to move through the system with few concerns over DON levels. However, the 2014 survey shows that increased diligence is needed in monitoring fields for ear mould and elevated DON levels. In particular, high DON concentrations in this year’s survey (>5.0 PPM) appear to be closely associated with ears that had Western Bean Cutworm (WBC) feeding. WBC damage fosters the development of ear moulds and toxin development. Related to that, some areas of the province seem predominantly free of DON while other areas have a majority of samples above 0.5 PPM (see map below). The survey also showed that where DON concentrations appear to be very low on average; hybrid impacts can still be significant, as side by side hybrids sometimes had significantly different DON levels. Growers and seed company personnel need to be vigilant in checking for ear mould or DON risks that might be hybrid related.
Moving Forward
The survey indicates that on average the 2014 Ontario corn crop is relatively low in ear moulds and vomitoxin. However, compared to the 2012 and 2013 corn crops there is distinctly more risk to having some DON present in grain corn. Stakeholders should be on the lookout for fields with ear damage (Western Bean Cutworm injury or bird feeding) as DON levels may be distinctly higher in those fields. In addition, late planted and/or frost injured fields where husk cover is tight may be at risk for mould and DON levels to increase. 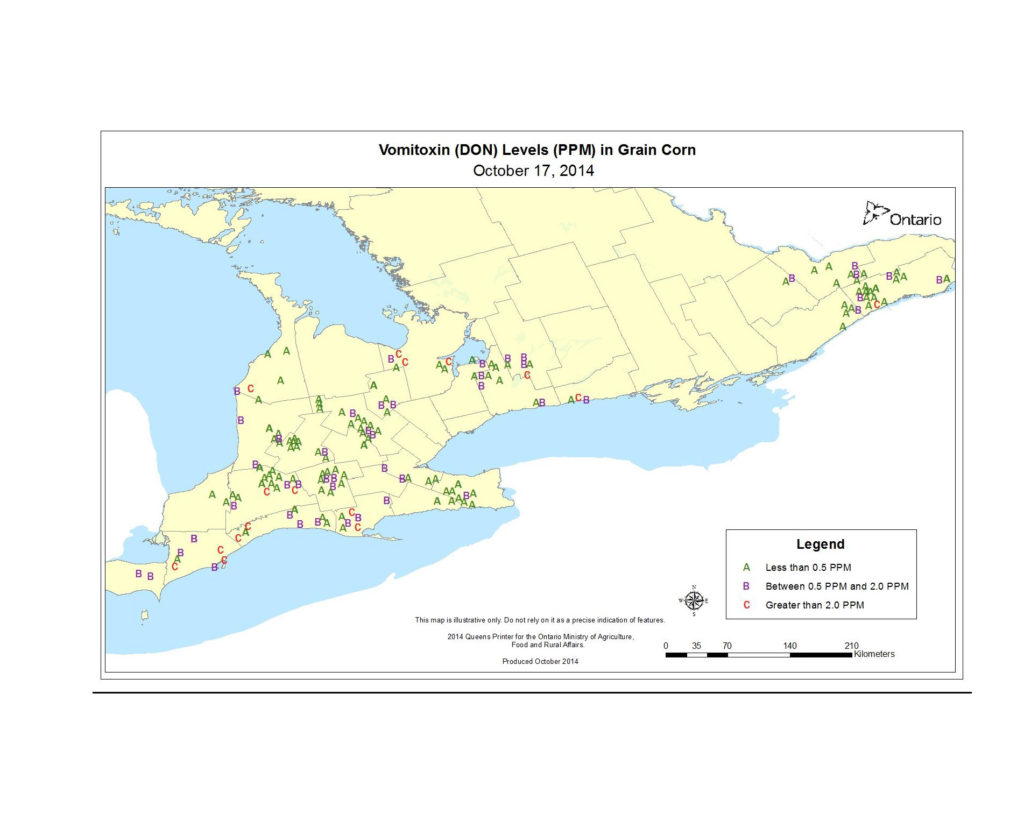 Acknowledgement
Appreciation is extended to the Grain Farmers of Ontario and A&L Canada Laboratories Inc. for their support of this survey and rapid analysis of the samples.