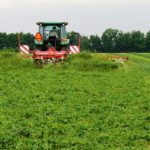 Forage inventories are generally more than adequate, with good spring carry-overs. With lots of rain, yields were good but it was challenging to make dry hay without rain-damage. Considerable haylage, baleage and poor to good quality hay were made. Premium “horse quality” green, dust-free 1st-cut hay and dairy hay is a bit more limited in supply and selling at higher prices. There are large quantities of much cheaper, poor quality, rained-on, dusty hay available. Export demand for quality hay to the US remains strong. With increased land costs, there is a trend to improve forage management to increase yields and quality in order to make every acre count.

Alfalfa winterkill and winter injury were reported across much of the province, including some new seedings and orchardgrass. Many areas in normally lower risk western and central Ontario were hit hard with extensive damage, where even some of the better fields suffered a small amount of damage in low spots. Winterkill in the higher risk Ottawa Valley was only about 10%, except for areas along the St Lawrence which had up to 80% winterkill. Winterkill more commonly occurred in older stands, and heavier soils with poor drainage. Cumulative management stresses that worsened the situation included late-fall cutting, poor soil fertility and pH, lack of potato leafhopper management (in 2012), and traffic damage from manure tankers. Environmental risk factors include the wet late-fall that reduced winter hardening, water ponding and icing (including the December ice storm), extreme cold temperatures, and crown and root disease. (Check Alfalfa Stands This Spring and Make A Plan https://fieldcropnews.com/2013/03/check-alfalfa-stands-this-spring-and-make-a-plan/ )

A cool, wet spring delayed diagnosis of winterkill and delayed the progress of new seedings. The preferred option if possible is to shorten the rotation and take advantage of the nitrogen credit and 10-15% yield increase to corn from the rotational benefits, and reseed forage in a new field. Cererals, cereal-pea mixtures and Italian ryegrass were often used to produce some early forage. Some sorghum-sudan was seeded following an early first-cut of injured stands. Some attempted to repair injured stands by no-tilling Italian ryegrass and/or red clover. Where grass content was acceptable, some nitrogen applications were made. (Forage Options When Winterkill Strikes https://fieldcropnews.com/2013/05/forage-options-when-alfalfa-winterkill-strikes/ )

Yield is significantly limited in older stands. Dandelions were quite visible again this year in weaker, lower yielding stands. Many stands are simply too old and need to be rotated, but some are also the result of low fertility, poor drainage and disease issues. Older fields that were harvested with aggressive cutting schedules that include a fall cut, often appear to be at higher risk of winterkill and reduced stand vigour and yield the following year. Shortening the rotation to compensate for potential reduced stand life is a good strategy. A 10 – 15% yield benefit to the following corn crop, in addition to the nitrogen credit, go a long way to covering forage establishment costs. (“Forage Options When Winterkill Strikes” https://fieldcropnews.com/?p=6680)

Low soil phosphorus (P below 12 ppm) and potassium (K below 120) are significantly limiting forage yields in many fields. (Don’t Lose Hay Yield To Poor P & K Fertility https://fieldcropnews.com/2012/06/dont-lose-hay-to-poor-fertility/) Some dramatic yield responses were seen this year when sulfur (S) was applied to alfalfa. A response is more likely on low organic matter soils, or those that have not received manure in the last 2 years. Tissue sampling alfalfa is a good diagnostic tool to predict a S response (< than 0.25% S). Applying elemental-S bulk blended with other fertilizer is the most cost effective method of providing S, but spring applications of sulphate (ammonium sulphate, Sul-Po-Mag or K-Mag, or calcium sulphate) can provide a more immediate yield response. (Sulphur On Alfalfa https://fieldcropnews.com/2014/07/sulphur-on-alfalfa/ )

Forage acreage is now holding its own, following significant reductions from 2006 to 2011. With high beef prices and low corn and soybean prices, forages are very competitive. Forage seed sales remain steady as farmers established new stands to replace older, less productive, and winterkilled stands. A cool, wet spring with poor soil conditions delayed new seedings past optimal dates. There was significant use of cereals and cereal-pea mixtures as companion crops. . This year’s summer seedings completed during optimum seeding dates in August appear to have been successful. Whereas spring seedings typically have a yield loss the year of establishment, summer seedings (seeded after cereals are harvested) can be a good way to establish new fields so that full season yields can be harvested the following year. (“Summer Seeding Alfalfa” https://fieldcropnews.com/?p=3316)

Brown root rot (BRR) is a is a significant and widespread fungus disease of alfalfa in Ontario. Infection of the roots can be detrimental to over-wintering vigour and promotes other diseases, winterkill, stand decline and yield loss. (“Brown Root Rot of Alfalfa In Ontario” http://www.omafra.gov.on.ca/english/crops/field/news/croptalk/2007/ct-1107a9.htm)

An alfalfa disease survey indicates that in addition to these newer diseases, more traditional fungal diseases such as phytophthora, pythium, rhizoctonia, and various fusarium species are very common. With the wet season, there were reports of orchardgrass suffering from fungus disease and some in timothy.

Grubs, including June beetles and European chafers, typically cause damage to grass hay fields in lighter soil areas, especially in central Ontario (Oak Ridges Morraine) (“Grub Damage In Hay Fields” https://fieldcropnews.com/?p=2786) Alfalfa snout beetle continues to be reported in small pockets in eastern Ontario. Fortunately it is presently contained to small areas, because it is very damaging and difficult to control.

First-cut yields were quite variable, with some winter injured in fields in western Ontario yielding very poorly, while some areas in eastern Ontario had very high yields. With some cooler than normal weather, the proportion of grass in mixed stands and the grass maturity relative to alfalfa was more advanced. Alfalfa development and growth was delayed 10 – 14 behind normal. Harvest of first-cut “dairy quality” alfalfa haylage did not begin until June 3rd in much of southern Ontario. The weather allowed for a timely first-cut haylage harvest resulting in Forage quality (crude protein, fibre and fibre digestibilities) was generally close to normal. (Using “Scissors Cutting” To Optimize Forage Quality” https://fieldcropnews.com/?p=2610)

Weather conditions for making quality first-cut hay without rain-damage were challenging in most of June, so considerable amounts of baleage were made. (“Baleage Tips” https://fieldcropnews.com/?p=3531) Others relied on the use of propionic acid in making dry hay. (“Preventing Mouldy Hay Using Propionate Preservatives” https://fieldcropnews.com/?p=3655) Some 1st cut hay was made that was either rain-damaged or became mouldy after baling at moistures that were too high.

Second and third-cut yields were variable, depending on rainfall in localized areas, but were typically average or above average. Where fourth-cuts were taken, yield and quality were very good.

There was again significant harvest during September. Depending on the age of the stand, fertility, pH, drainage, and fall and winter weather conditions, this may increase the risk of alfalfa winterkill. Closely monitor these fields in the spring. (Fall Cutting Alfalfa https://fieldcropnews.com/2014/09/fall-cutting-alfalfa/)

With higher land costs, many farmers are double cropping to produce low cost forage by growing summer seeded annuals. Annual forage crops include cereals (mostly oats, but also some barley and triticale) and cereal-pea mixtures, and also warm season annuals such as sorghums, sorghum-sudans and millets. Much of this was seeded in August following winter wheat and spring cereals and harvested as haylage and baleage. (“Summer Seeding Oats For Forage” https://fieldcropnews.com/?p=7813) Italian ryegrass seeded in August, overwintered, and harvested in May is another increasingly popular option because of exceptionally high forage quality. (“Italian Ryegrass Forage Options” https://fieldcropnews.com/2014/06/italian-ryegrass/) There was also some September and early-October seedings of fall rye and triticale, which will be harvested as haylage in May. (“Double Cropping Fall Rye For Extra Forage” https://fieldcropnews.com/?p=5241)