Another large hit of rainfall in eastern Ontario has put a stop to field work in the area again. Other parts of the province were slowed down by smaller amounts of rainfall over the weekend and overnight Thursday; however combining and hay harvest have started again.

The two week forecast is showing some real opportunity to get field work done so combines and sprayers are rolling and hay equipment is in the field.

Good progress has been made on harvest in Essex and Kent, areas further east and north started the first of this week. Harvest to date has shown average to above average yields and good grain quality. Protein is running 9-9.5%. Despite the wet conditions so far in the 2017 field season, there has been very little fusarium or other disease impacts showing up in the crop harvested to date.

When combining, think about plans for the field following harvest. Ensure the combine is spreading the chaff uniformly and broadly. The goal should be to spread the width of the header. Where red clover is underseeded, this is especially important to ensure that the sensitive red clover seedlings are not smothered. Where straw is to be harvested ensure the swaths are quickly baled and removed from the field to aid red clover growth. Where straw is being left in the field, ensure it is well chopped and evenly spread as it has an impact on decisions related tillage, cover crop planting and volunteer wheat termination.

Volunteer wheat is a problem in lost revenue, and red clover or annual cover crop stands for both seedling establishment and plans for terminating the cover crop.  With lots of moisture red clover should flourish rapidly and germination of annual cover crops planted in the next month should be excellent. Watch the planting timing of cover crops relative to the species choice and expected growth possible with the amount of moisture available.

See last week’s crop report for coverage on Western Bean Cutworm (WBC) (https://fieldcropnews.com/2017/07/omafra-field-crop-report-july-20-2017/). In terms of tasselling, there are almost 3 distinct crops across the province based on planting date. Many fields are not uniform because of the cool damp weather and this makes insecticide timing for optimal WBC control problematic. A lot of fields are currently coming into tassel and silking has or will begin shortly. WBC has been found in many fields and in non-traditional areas where this pest has not previously been a problem. Scout! Where insecticides are deemed necessary, timing is critical to achieve optimum control. The goal is to protect the silks which the larvae feed on and result in injury to the ear and entry for disease. Consult the Field Crop News website at https://fieldcropnews.com/2017/07/for-western-bean-cutworm-timing-is-key/ for additional information on WBC thresholds as well as optimal scouting and insecticide application timing. Information on product choices is available in the OMAFRA Field Crop Protection Guide (http://www.omafra.gov.on.ca/english/crops/pub812/p812toc.html ) 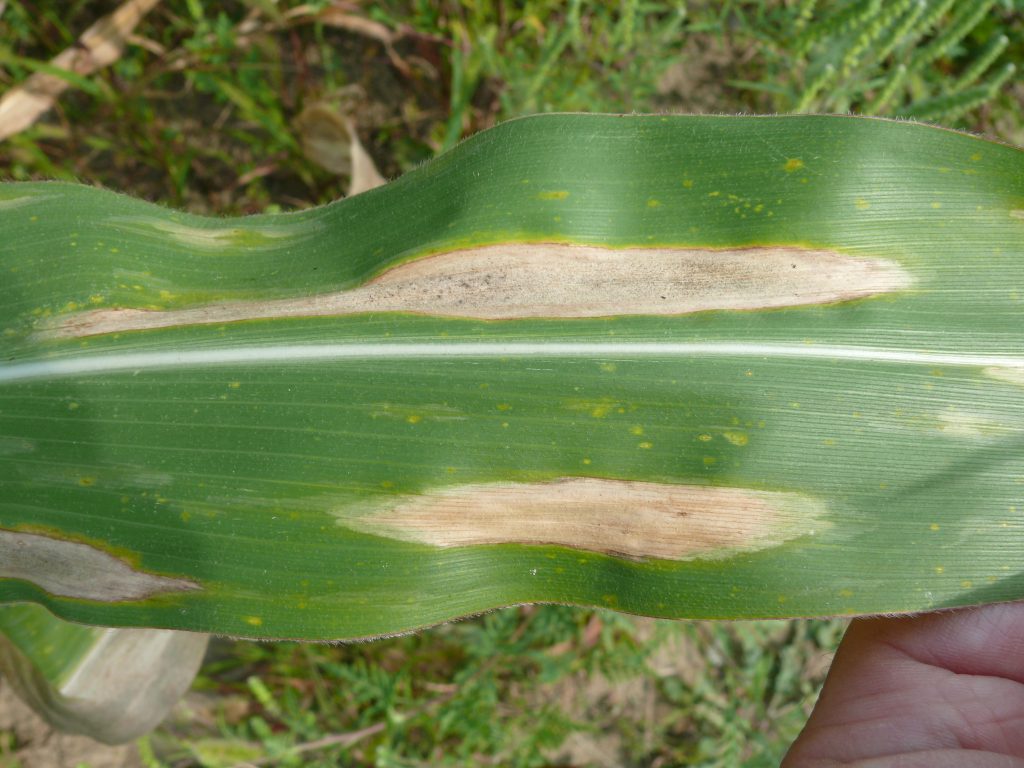 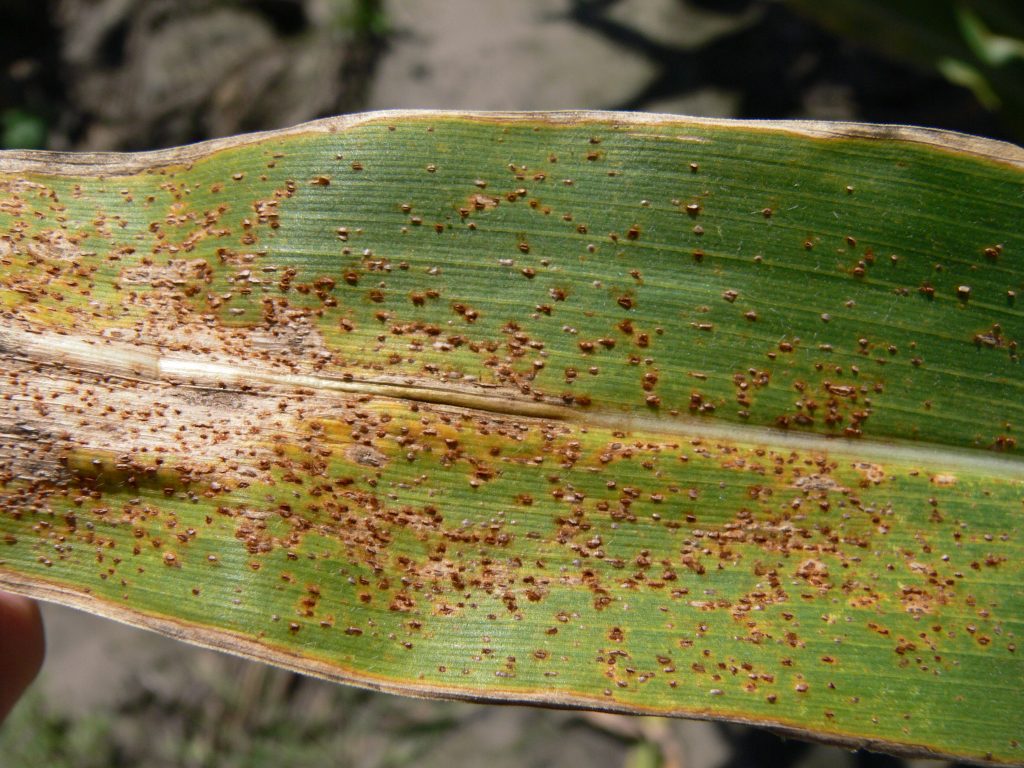 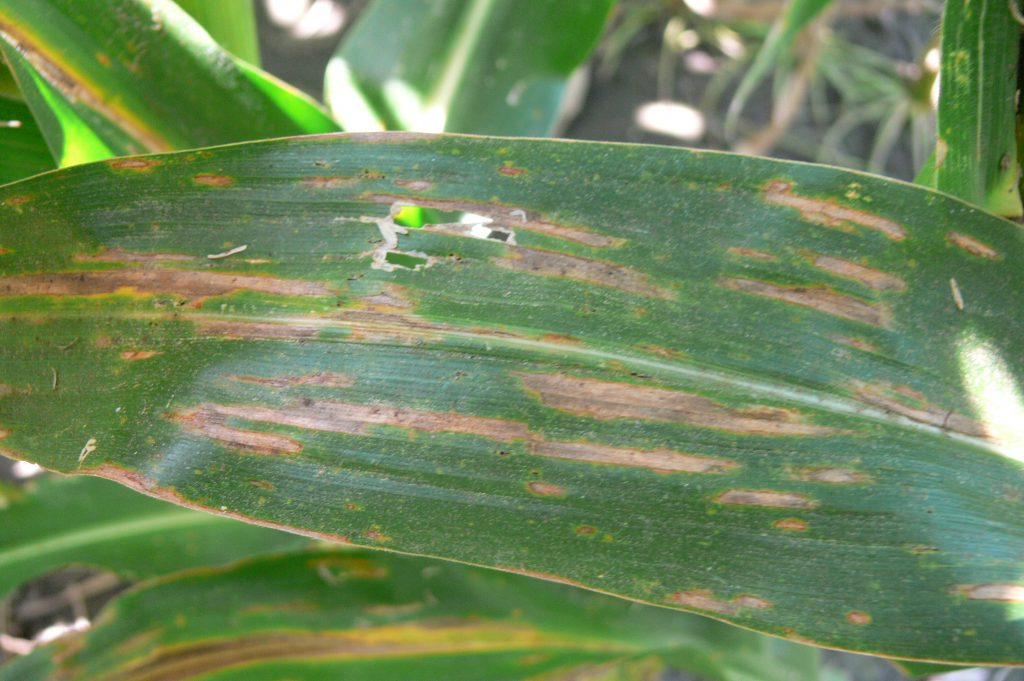 In many areas the soybeans have seen significant improvement in the last week. They and other crops continue to need sunshine and warm temperatures.

Insect pressure has been relatively low across the province despite the weather. Aphids are present in fields in many locations but at very low populations in most cases. Scouting to monitor this pest is important.

Many areas continue to receive above average rainfall.  This, along with cooler summer temperatures, makes ideal conditions for white mould development and other diseases in soybeans.  Foliar fungicides should be considered if a field has a history of white mould or shows symptoms of other foliar diseases.  Fields with continuous soybeans in the rotation often respond more to foliar fungicides than fields with a good crop rotation.  For most diseases an R2 (full bloom) up to R3 (early pod formation) timing is considered ideal to protect the most flowers as possible.  Ontario yield trials have shown that a mid R2 timing provides a higher yield response than spraying at later growth stages.  Spraying too early (before flowering) has shown no yield benefits.  If white mould is the only disease of concern a two application strategy should be used if weather conditions favour the disease.  In this case the first application may be applied as early as R1 (beginning bloom) followed by a second application 10 to 14 days later. Once the disease is visible it’s too late to spray.  Only some foliar fungicides registered for soybeans have activity on white mould so check the label before application.

With the extended planting window for canola this spring, some fields are still flowering but most have passed this stage. While swede midge has been in high numbers in trap counts this year, the amount of damage detectable in the crop is relatively low although incidence of damage can be found in almost every field.

Beans are moving toward row closure in most fields, but it has been slow this season. Fungicides are standard practice in edible beans. Timing should be at 30-50% bloom. There is concern for root rots with the season’s weather and growers should be on the lookout for anthracnose.

While much of the provinces haylage has been harvested with good quality for both cuts so far, dry hay quality is suffering. There are still people working to get a first cut of dry hay harvested. Yields have been okay for the most part although potato leaf hopper has been caused significant yield loss and seedling stand loss, especially in the east. While both cutting timing and insecticides are standard management practices for this pest, the wet weather has prevented many people from doing either on a timely basis. Stands will have to be assessed thoroughly in late fall and next spring to allow planning for the required amount of forage required next spring. 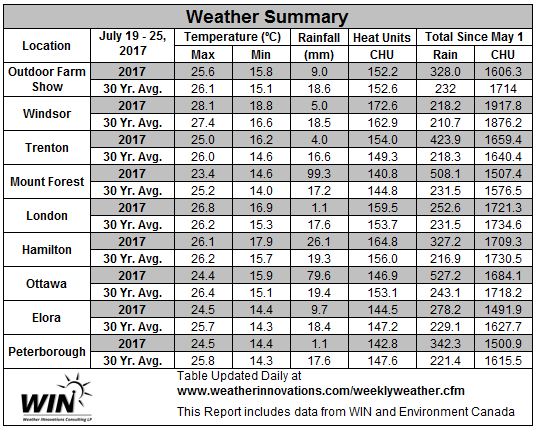