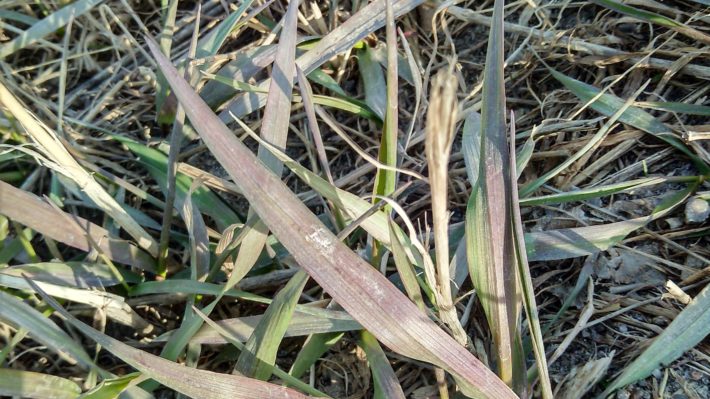 Photo: Orchardgrass accumulates anthocyanins during sunny days and cold soil conditions when photosynthesis outpaces root development. Turning purple is temporary; it will grow through this.

Most of the province had average amounts of precipitation over the winter. Areas of Chatham-Kent, Lambton, Huron, Grey, Bruce, Temiskaming, Cochrane, Rainy River, and Kenora received below-average winter precipitation. 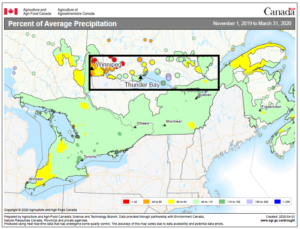 Overall, reports of winterkill suggest normal or below-normal levels, except in Prescott & Russell, where high amounts of alfalfa winterkill occurred.

Planting intentions for forage acres are up compared to 2019, and most fields intended for cool-season forages across Southern, Western, Central, and Eastern Ontario have been planted.

During the month of April, Southern, Western, and Northern Ontario had below-average precipitation. Central and Eastern Ontario, and Cochrane District received average amounts of precipitation. This has allowed field work to progress steadily in areas that are at lower risk of a late frost. 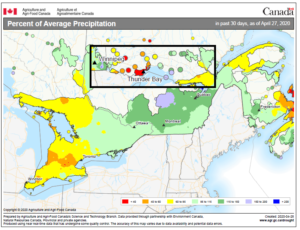 Despite good soil conditions allowing producers to get into the field earlier than in 2019, GDD accumulation has not been as quick in 2020. This may cause alfalfa development to lag behind grasses, as grasses respond more to day length than temperature when entering reproductive growth stages. 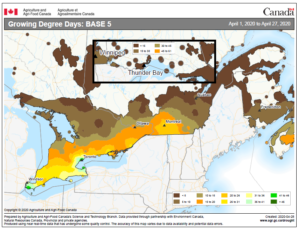 The order in which different forage species are ready to be cut in the spring is consistent year to year:

Sometimes taking a high-quality first cut conflicts with planting silage corn. Research has shown that a day of delay in cutting haylage loses more quality than a day of delay loses corn yield. In addition, forage quality is worth more; while the energy and indigestible fibre in silage corn can be replaced with grain and straw, the digestible fibre of haylage cannot be easily substituted. When there’s a conflict between field work, harvest the hay first, then plant the corn.

Pastures are ready to be grazed when grasses have 3-4 fully developed new leaves. An application of 55 kg N/ha (50 lbs/acre) can boost pasture yields. However, preventing grass growth from getting ahead of livestock and becoming over-mature can be a challenge. If cutting some of the pasture for hay(lage) is not an option, consider only applying N to the third of the pasture that will be grazed first.

Assessing how well hay fields have overwintered is important to proactively manage the farm’s forage production system. Details on scouting alfalfa at green-up, again when there is 15 cm (6 in.) of growth, and following a frost can be found HERE.

The Great Lakes and Maritimes Pest Monitoring Network will be running again in 2020. Monitoring will be conducted for black cutworm (BCW), corn earworm (CEW), European corn borer (ECB), fall armyworm (FAW), true armyworm (TAW) and western bean cutworm (WBC).  Interactive real-time map and trap data during the season can be observed on a dashboard that summarizes the trap results by pest. Information on the network and trapping instructions for each pest can be found HERE.

Trap networks in New York state have detected true armyworm in fields. Armyworm prefer to feed on grasses and cereals. Producers are encouraged to start scouting for true armyworm in these fields and pastures that had green vegetation in April in the next couple of weeks. Scout every 4 days along field boundaries shortly after dusk to stay ahead of invasions. Armyworm will “march” from neighbouring corn, cereal, or grassy fields, so the edges of fields next to these crops should be priority. For more information on true armyworm, see pages 315-316 of OMAFRA Publication 811: Agronomy Guide for Field Crops or the Baute Bug Blog HERE.

AAFC’s Agroclimate Impact Reporter is interested in how weather impacts farms throughout the growing season (i.e. what’s really happening on the ground). This ag-sector citizen science effort feeds into AgriRecovery and other programs. The monthly survey takes ~5 minutes to complete. To join the reporter network, visit http://www.agr.gc.ca/eng/agriculture-and-climate/drought-watch/agroclimate-impact-reporter/?id=1463575416544

Another citizen science effort that lets decision-makers know about the impact of weather on farms is the CoCoRaHS (Community Collaborative Rain, Hail, and Snow) network. CoCoRaHS recognizes that precipitation is very variable even over the shortest distances. By having volunteers monitor precipitation in their area, they aim to better capture this variability. To sign up as a volunteer observer, visit https://www.cocorahs.org/CanadianApplication.aspx 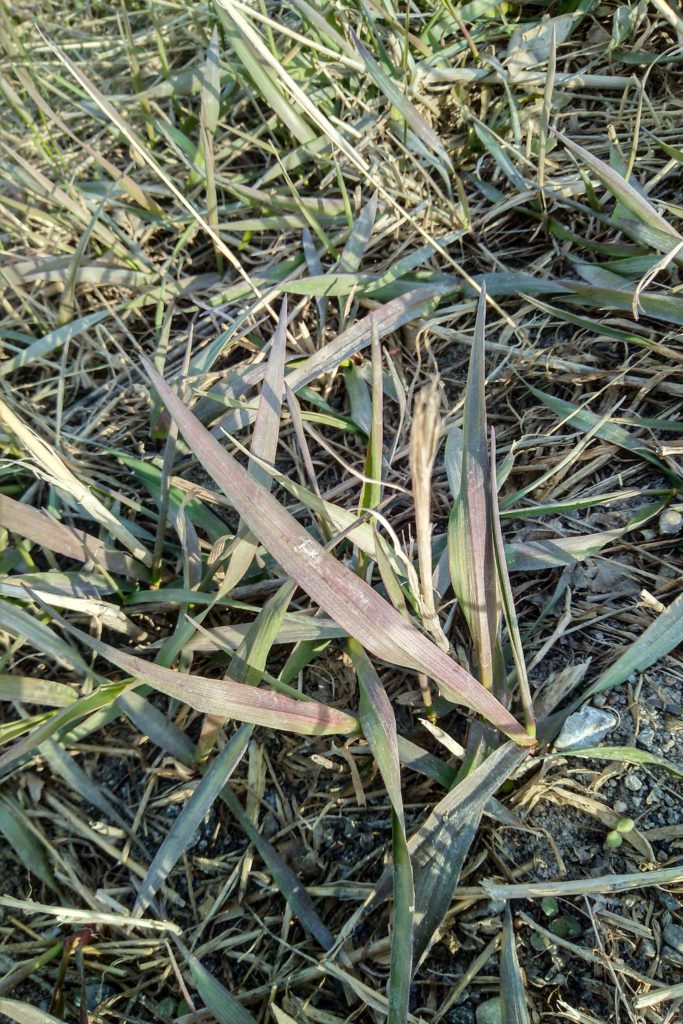