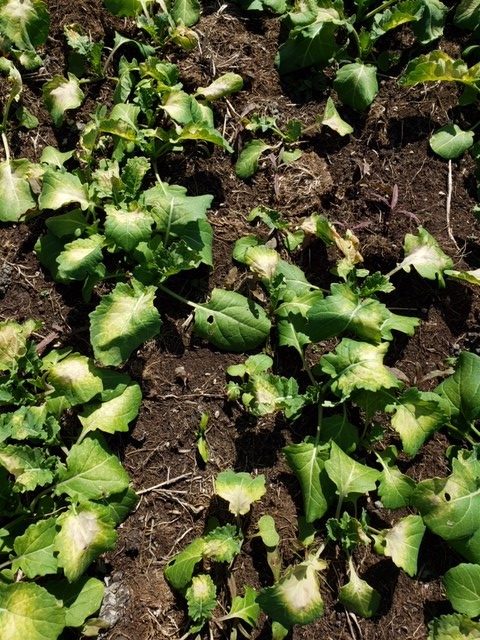 This was the last spring breakfast meeting for the northern Ontario group. We would like to thank everyone that has participated in the first year of virtual breakfast meetings across the north. Please provide feedback (meghan.moran@ontario.ca) on whether you would like to continue the meetings next season and how we might improve the experience to provide more value to growers and crop advisors. The group discussed holding one more meeting after harvest this season; information about that will be distributed to the contact list at a later date.

It has been a spring of extremes, particularly across the north. Frost this past weekend has caused some damage to corn, soybeans and canola but there has also been extreme heat causing discomfort to livestock (and humans). Cochrane district has been cool and wet while other regions are hoping for some rain.

Swede midge populations in the northeast are very high on many canola fields. Studies by University of Guelph have shown that swede midge are abundant in the northeast not because of specific climatic conditions but because of the high acreage of canola. Many growers drastically reduced canola acres or stopped growing the crop for a few years to allow swede midge populations to decline, but over the past 3 seasons, canola acreage has been climbing again. The reduction in acreage did seem to mitigate issues with swede midge for a time, but it is expected that as acreage increases the swede midge populations will increase again. When a total of 20 adults have been captured from the start of trapping, threshold has been reached and the first insecticide application is warranted. Subsequent insecticide treatments may be necessary if an average of 5 adults per trap per day are caught and the canola is still in pre-flowering stages. Insecticides should be applied as soon as thresholds are reached.

A beneficial parasitoid has been found in northeastern Ontario (and other regions) which may help somewhat in managing swede midge populations, but so far parasitism rates are below the level where they would provide meaningful crop protection. However, one way we can help maintain these parasitic wasps is by avoiding use of Matador for swede midge control, as it will also kill the wasps. Coragen has been shown to be safe on the parasitic wasp. Swede midge have not yet been found in northwestern Ontario, but traps have been set at the Emo Research Station to monitor for swede midge. More info on the wasp can be found here:

FieldCropNews: Surveying for parasites of swede midge in Ontario

FieldCropNews: Biological control for swede midge and its parasitoid in Ontario

Diamondback moth adults have been observed in sticky traps at Emo (they are unrelated to swede midge but happen to have flown into the sticky traps). More information about diamond back moth can be found here. Diamondback moth larvae are green with a forked hind end and may be found in a netting of silks on canola leaves. The larvae feed on leaves until the leaves are gone, then feed on pods which can lead to shattering. It is important to use the appropriate scouting methods when assessing diamondback moth larvae pressure. The threshold is 20 to 30 larvae/ft2 (not per plant), so it is best to pull out plants within a square foot and beat them on a drop cloth or hood of a car and count the larvae. Avoid using a sweep net, because it is likely that an alarmingly high number of larvae will be found in the net even if threshold has not been reached. Spraying may be warranted if there is limited leaf tissue and many larvae are found feeding on pods. Typically, the larva are found after canola has bolted.

Grasshoppers have been found at high levels in specific locations in the northeast, where they have been feeding on soybeans. At the high levels observed, spraying is warranted. It is expected that all eggs would have hatched already, but scouting should continue for 2 weeks after pesticide application to ensure there is not a second flush of egg hatching. Coragen is registered in soybeans, forages and cereals for grasshopper control. If a second application is needed, a different product should be used, such as Matador or Malathion. 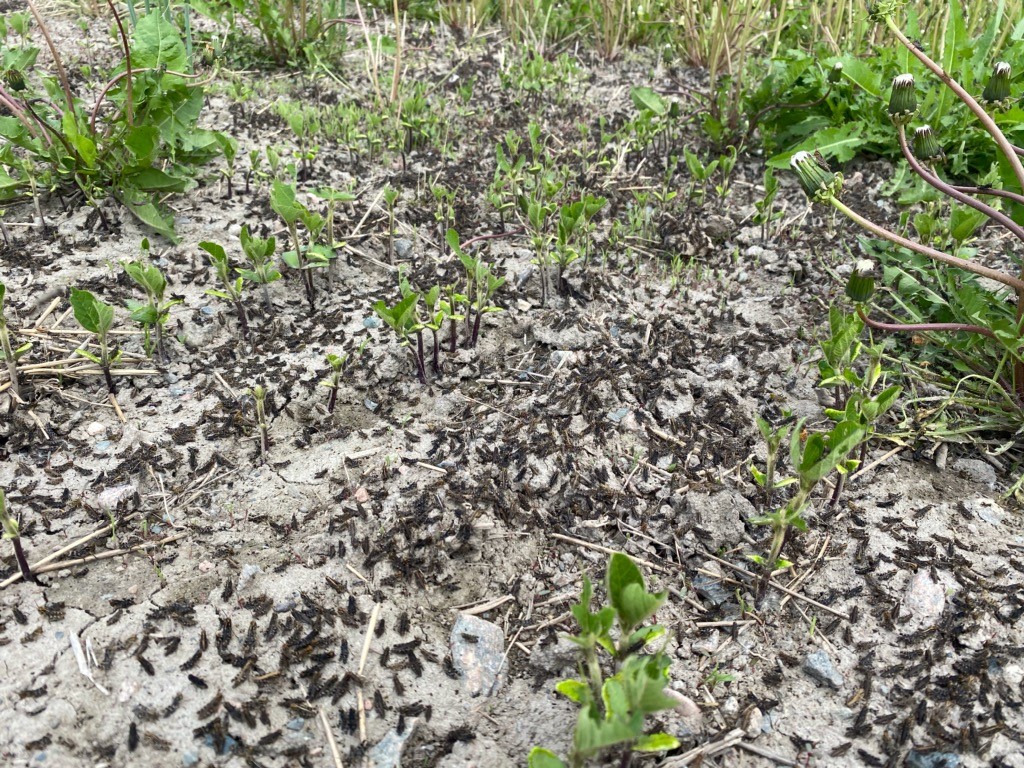 True armyworm is being found in high numbers in cereal and mixed forage fields in many regions of southern Ontario. Northern producers should keep an eye out for this pest, which may arrive a week or two later in the north. Likewise, producers should watch for cereal leaf beetle. More information on those pests can be found here.

Alfalfa weevil have been found in the Rainy River area, which has been uncommon historically, although they are frequently found in Minnesota. Open buds on alfalfa plants and look for the light green-coloured larva. The best way to manage the weevil is to cut the alfalfa, even if that has to be done earlier than the field would typically be cut. If the field is two weeks away from being cut, insecticide spraying may be warranted. There is only one generation per year so they should not be an issue in second cut. There is a beneficial fungus as well as a beneficial parasitic wasp that can keep alfalfa weevil in check. If the larva look yellow or brown they are likely dying from one of these beneficial organisms. Thresholds are related to plant height, more information can be found here.

The regions received some needed rain last week which has improved growth of pastures. Some areas had 3 to 5” of rain followed by cold temperatures on the weekend. The cool, wet conditions were followed by extreme heat of 33-35°C. These extremes are causing stress on crops. Winds have also been strong, causing delays in getting pesticides sprayed. Cows seem to be cranky with high temperatures and bugs. Some producers are concerned about thin alfalfa crops where there had been significant winter kill. As mentioned previously, alfalfa weevil are being found in the region. Haylage harvest has begun.

Temperatures fell below zero for 4 straight days in some areas. So far there has not been a need to replant anything, although corn under plastic has been the hardest hit. This week, temperatures rose above 33°C. There was a good rain last week, but more would be welcome. Good moisture may have helped mitigate issues with frost. Most herbicide application is complete. Silage harvest has begun.

The region remains very dry, with just 1.5” of rain since May 1st in some areas. Most farms are into second pasture rotation and pastures are looking good. Haylage harvest has begun. Small grains are looking excellent and really benefited from rain in late April. Herbicide applications in small grains are done and corn is being sprayed now. The corn is at V4-V5 and about 6” tall and is showing signs of stress from dry conditions.

Frost on the Friday and Saturday nights damaged some canola fields with leaves turning white, but the crop should recover. Some soybeans were lost to frost and have to be replanted, mostly on muck soils but also on other non-muck fields with high organic matter. Corn is showing some signs of frost damage but should recover. The back and forth temperatures, frost damage and wind have caused problems with appropriately timing spray applications. Weeds are getting larger and there will likely be weed escapes. Haylage harvest began a week ago and alfalfa fields were started in the past few days. 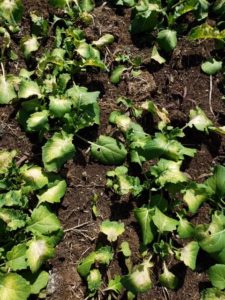 Conditions have changed from cold and wet to very hot. Many fields are dry on top but wet underneath, and there is rain in the forecast this week. Some field may not get planted this year. Cold, wet weather turned barley yellow at emergence and the crop is set back, but oats and corn look healthy. Peas and oats are being planted but will be harvested as forage. Some hay harvest has begun. It was reported that a herd of cows got loose and 20 are yet to be found.

High winds have made it hard to get weed spraying done on time, and crops are emerging before “burndown” applications so annual weeds are getting ahead. There are a lot of insects to deal with, and spraying is being done for flea beetle, cutworms and more. Seeding was done when fields were wet in many cases, and so sidewall smearing and seed row compaction are causing issues, which are exacerbated by the hot, dry winds that are occurring. This has resulted in poor establishment, and some nutrient deficiencies and floppy plants due to poor nodal or secondary root establishment.

Producers that are new to AgriStability, rejoining, or already enrolled are encouraged to check out the slide show on the Agricorp website that provides an overview of how the program works and the benefits of participation. Farmers interested in signing up or rejoining AgriStability now have until July 3, 2020 to enroll and pay their fee. View the slideshow here.

Producers are also encouraged to report acres online by June 30. A video on this has been posted here.

Peggy Brekveld, who farms near Thunder Bay, was recently named as one of 6 Influential Women in Canadian Agriculture. Peggy and her husband Gert own and operate Woodstar Farm, a 70-cow dairy operation. Peggy is Vice President of the Ontario Federation of Agriculture (OFA) and has served on other boards, such as the Agricultural Adaptation Council. She enjoys promoting the importance of agriculture and local food to provincial politicians, municipalities, students and other community groups. She helped bring together the Thunder Bay District Agricultural Economic Impact Study, a website for her county federation (www.tbfarminfo.org), promotional displays and farm tours. Brekveld is a Class 12 graduate of the Advanced Agricultural Leadership Program. In 2008, the Brekveld’s were finalists in Ontario’s Outstanding Young Farmers program. We would like to congratulate Peggy on her award and thank her for her contributions to Ontario Agriculture.