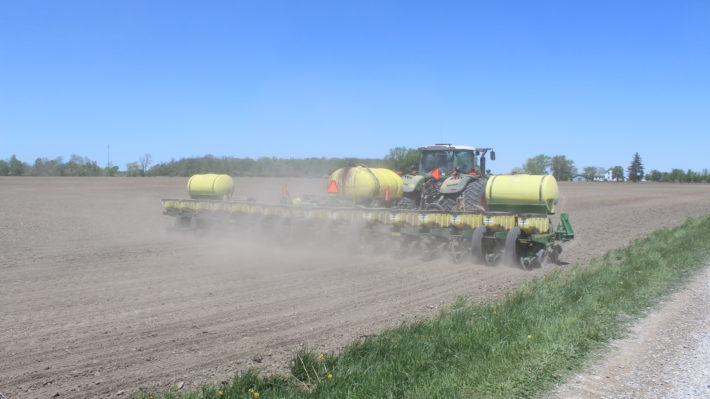 Depending on the region, about 75 growing degree days (GDD) have accumulated since the last meeting.. It takes about 100 GDD for wheat to advance through each growth stage, so wheat has not been growing quickly during the cool weather the past two weeks. In many areas it is still at growth stage 30 to 32.

Most fields have now had all nitrogen applied. Generally speaking, the crop still looks good. However, a few fields in the Dundalk area and into northern parts of Grey County have been terminated because of injury from snow mould, cold conditions and wireworm feeding. There has also been cold injury leading to termination in areas near lakes and where temperatures were very low.  Extensive powdery mildew has been observed in fields with thick growth, or on susceptible varieties. Some fields where two varieties are being grown have powdery mildew in one and not the other. In some cases where the mildew is significant the wheat looks to be off-coloured (lime green).  Septoria is also being observed. A few participants stated that these disease observations call for application of a fungicide at T1 timing.

Plant growth regulators (PGRs) were discussed again this week, and many wheat fields are still in the optimal growth stage for application of PGRs. Proliant should be applied prior to growth stage 31. Ideal timing for Moddus is growth stage 30-32 but the window for application stated on the label extends to growth stage 39. If temperatures the day before application of Moddus were below 3-5°C it is best to apply the PGR alone and you may want to wait for warmer weather. When additional products are added to the tank there is more risk of crop injury. If a tank mix is planned, use higher water volumes (e.g., 20 gal/acre, 200 L/ha).

Crop inputs should be applied in warm conditions later in the day. Producers should consider prioritising products that are most urgent and delay application of less urgent products until conditions are warmer rather than tank mixing.

Winter annual weeds such as Canada fleabane are getting larger and will bolt soon with warm weather, and dandelion are starting to flower. Annual weeds such as lamb’s-quarters are being observed but some are waiting for more weed emergence before herbicide applications go down. It was noted that with the cool and cloudy conditions, wheat leaf cuticles should be thick which is beneficial for crop safety of herbicide applications.

Participants calling in from diagnostic labs noted there has been more soil samples submitted this spring, and sampling has occurred earlier than normal. There is a trend towards higher intensity sampling in smaller zones. There was some discussion on variability in test results where repeated samples are taken from the same area. In clay soils, labs have noted about 20% fluctuation in soil potassium levels depending on how dry the soil is. In general, less variation is observed with phosphorous levels. Wheat tissue samples submitted this spring include those that are deficient in nitrogen, sulphur, and a quite a few with manganese (Mn) deficiency. See the notes on Mn deficiency from the last meeting HERE.

OMAFRA will be tracking and collecting true armyworm this season and evaluating the level of parasitism. Contact Tracey.Baute@ontario.ca or Joanna.Follings@ontario.ca if you find true armyworm. They will also be tracking cereal leaf beetle levels so please contact OMAFRA to share the CLB populations observed this season. AAFC will be assisting with validation of models to guide scouting of these pests. Photos and information about these pests can be found in THIS ARTICLE from 2020.

Some planting has occurred into good soil conditions. Corn planted in early April has not yet emerged, but the seeds have germinated and look healthy. It is still early in the corn planting window. Corn planters are rolling today and this week, although some rain is expected. The top few inches of soil are dry in many areas but there is still moisture below. In this area, most producers will plant corn before soybeans; not many soybean fields have been planted.

Dandelion control options were discussed. The best option for longer-term control of dandelion is 1.34 L/ac of glyphosate (540 g/L) tank mixed with Classic. It will be a few weeks before you can see good control. Adding Eragon LQ will result in quicker burndown of a dense mat of dandelion ahead of planting, but regrowth may be observed. Regrowth is minimized when the   1.34 L/acre rate of glyphosate (540 g/L) is used. If there is also fleabane to control, add metribuzin (e.g., Sencor) to the glyphosate and Eragon LQ. When fleabane starts to bolt, using 20 gal/ac water volume improves coverage and control with Eragon LQ , a contact herbicide. The addition of metribuzin  will not improve dandelion control as it can antagonize the activity of glyphosate. An older article (2012) on dandelion control ahead of soybeans can be found HERE, or consult Chapter 1: Management Strategies for Problem Weeds in the OMAFRA Guide to Weed Control.

Volunteer (conventional) alfalfa can be managed ahead of corn planting with a high rate of glyphosate or glyphosate + 2,4-D ester. Other corn products that provide decent activity on volunteer alfalfa include Acuron, Lontrel XC, Distinct, Marksman and Engarde/Destra IS. If the alfalfa is glyphosate tolerant, 2,4-D Ester can be used but corn should not be planted until at least a week after application to improve control alfalfa and crop safety. For more information, refer to THIS ARTICLE  and Chapter 1: Management Strategies for Problem Weeds in the OMAFRA Guide to Weed Control.

The weather has been great for manure application this spring, Most producers have this job done already, and many have said this is the earliest they’ve finished. It was noted that dragline application is becoming more popular.

Alfalfa may have drooped over during cold conditions, but in most areas it was not cold enough to cause injury. Forage fields generally look good. Priaxor fungicide on alfalfa was discussed. It is applied at an alfalfa height of 4-8” and producers are reminded that it has a pre-harvest interval of 14 days. Yield claims associated with Priaxor are based on a minimum of 21 days between application and harvest, with longer intervals offering greater dry matter accumulation. Growers are reminded that prophylactic use of fungicide will hasten fungicide resistance, and larger increases in total available forage are possible by improving silo management to minimize shrink.

Winter canola is advanced compared to last year, and is in the bolt to first flower stage, depending on location. Information on frost tolerance of winter canola can be found HERE. Last year, Mercedes canola showed good tolerance to late spring frosts. Risk of injury is greatest with extended periods at -4°C or below. Open flowers and possibly some flower buds will be damaged with frost events, but canola may be able to compensate for those loses with later branches and flowers. Stems will droop over during cold conditions but should stand up again when temperatures warm; if stems remain a bit crooked it is not a problem. Some cracked stems were observed after frost events last year, but they did not appear to become diseased or cause issues.

Fungicides to manage risk of white mould are applied at 20-50% bloom. Commonly used products include Proline and Cotegra. A bloom stage guide can be found HERE. Producers should also be monitoring for cabbage seedpod weevil. Note that there are often a lot of different harmless insects in winter canola fields because they are some of the first flowers on the landscape. We want to avoid unnecessary insecticide applications to blooming canola, but if weevil control is warranted the timing of insecticide often aligns with fungicide timing. A sweep net must be used to assess weevil populations in multiple areas of the field, not just field edges. For help assessing weevil populations, contact Meghan.Moran@ontario.ca. 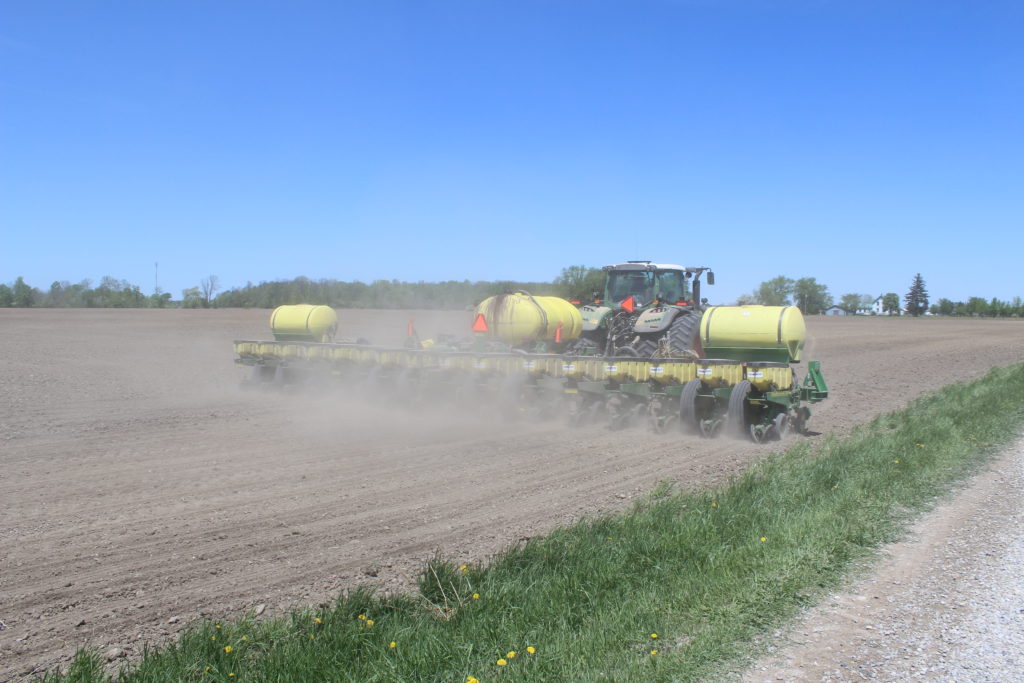