The last two weeks have been dry, although some areas received rainfall and/or thunderstorms. Frost damage has affected some corn and soybean stands, particularly on muck soils in Renfrew and Glengarry. There have been isolated reports of hail damage around St. Isidore and on Wolfe Island. 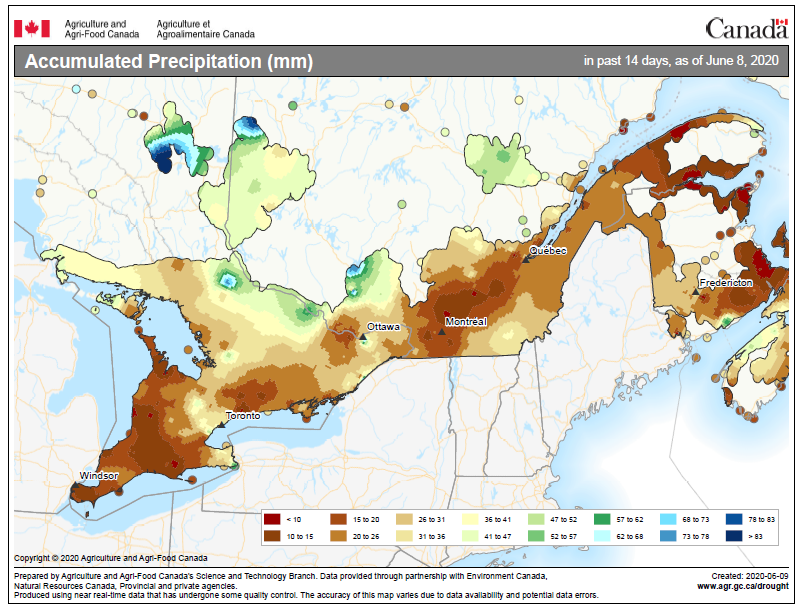 First cut is underway across the region. Reports suggest yields are average to excellent. Quality is unknown at this time, although some fields were rained on before they were dry enough to bale. Fields with a high percentage of alfalfa are a week or two behind normal.

Alfalfa snout beetle has been found in new seedings in Stormont. The larvae are found in the soil and feed on the roots, leaving grooves that girdle or sever the taproot. More information on scouting and control can be found on page 337 of OMAFRA Publication 811: Agronomy Guide for Field Crops.

Alfalfa weevils have been found in Peterborough County. It was noted that this pest is unusual of Kingston. The larvae feed on leaf buds and tips, and heavy infestations can cause skeletonization of the leaves. Thresholds for control vary with the height of the crop and whether biological controls are already acting upon the larvae. Cutting is the first choice for control. More information on scouting and thresholds can be found HERE.

Now that summer thunderstorms are rolling through the region, producers should also be scouting for potato leafhopper (PLH). It is the most significant alfalfa pest in Ontario, but the damage PLH cause is often blamed on drought or boron deficiency. Once PLH arrive there are several generations until the first killing frost. Information on scouting and control can be found HERE and HERE.

Alfalfa isn’t the only forage crop that can be damaged by insect pests. True armyworm feeds on grasses and cereals, and trap networks in New York state were reporting high numbers in April this year. Pastures, cereal/pea mixes, and grassy hay fields should be checked regularly to stay ahead of armyworm invasions. More information on scouting and control can be found HERE.

In general, the corn crop looks good, and in some areas is a week ahead of normal. However, there are tough-looking fields, variable stands, and low populations in some places, primarily further east. Some of this is the result of cold injury, while in other fields it is due to variability of planting depth. While these variable stands are often attributed to heavy surface residue, they are reported across a range of tillage systems and residue levels.

Most of the crop is between V2 and V4 and is growing quickly. Side-dressing N has started, with the bulk likely to occur over the next 2-3 weeks. The biggest challenge will be getting all the acres covered since the corn staging is all the same this season and growth being very rapid now. Anticipate a narrow application window this year and be ready.

OMAFRA Field Crop Unit staff are conducting the annual Pre-Sidedress Nitrogen Test (PSNT) survey across Ontario this week to measure background soil nitrate levels mineralized from the soil as an indication of year-to-year soil nitrogen status. Results will be posted on FieldCropNews.com by end of this week.

Replants have been more common in the far eastern part of the province than in the area between Toronto and Kingston. Many were due to seeding depth issues, especially where planters were unable to plant through heavy residue. Some replants are the result of cold injury, and a few are due to crusting in heavy soils. 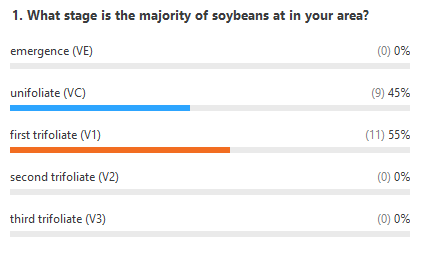 Thin stands are common this year. There was discussion around a minimum population at which to consider thickening the stand or re-planting; the range at a minimum was 40,000-90,000 plants/acre. Factors affecting those replant decisions include soil texture and soybean variety and date.

Overall, the crop is looking very good. No one on the call reported frost damage. There is minimal weed and disease pressure. The most common issue seems to be dandelion escapes, because they were too big by the time conditions were right to apply herbicide. Heads are emerging in many fields, so the timing for fungicide applications is arriving. To assess the level of risk for DON in your area check out the DONcast model at www.4rcast.ca. You can also determine the resistance of your variety to FHB at www.gocereals.ca. Other information related to disease management can be found here. The crop is shorter than normal due to the cool spring conditions, so this may impact straw yields.

Sulphur deficiencies seem to be common based on the tissue testing done by agronomists and labs. However, in many cases there is no difference in colour between wheat with adequate sulphur and wheat that is deficient.

Spring cereals are approaching GS 30-32 which is the ideal time to start applying use a plant growth regulator. While it can be tank mixed with a fungicide or  herbicide, a three-way mix tends to cause a lot of burn and is not recommended. 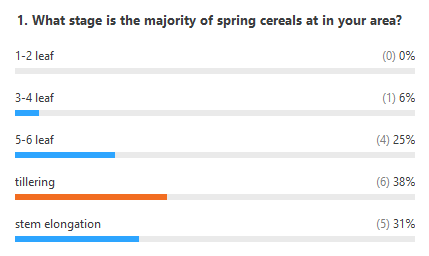